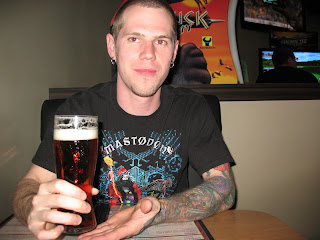 On a Friday night what could be better than hanging out in a pub and drinking beer ? Riding ?........well yes but , hiking ? umm okay , spelunking ? that`s unrealistic around here ...Come on !How about spending time with your family Ken huh ? Oh come on ! Now your your laying the guilt trip on me .....and who is typing this !?!

I`m back and have just taken my medication and should be good to go but I only have ten minutes until I pass out once the heavy benzodiazepine kicks in and I pass out . Tonight`s beer review comes from Canadian Tap House on the south side of Edmonton , where we learned lot`s of giant douchebags congregate and hang out ........Seriously , it was that bad ! Joining me tonight was a good friend by the name of Justin . The beers tested tonight were Sleemans honey brown and Becks (both draft). Unfortunately being in a bar all the research usually obtained on this amazing beer review site on the history of the beer being tested cannot be obtained as there were too many distractions amongst us .

As far as the tasting went Justin enjoyed his quite well and said it had "a robust honey flavour with a mellow aftertaste that leaves you wanting more" ..........well Damn ! That`s alot better then what I wrote down "my beer is a fine ale that you could find anywhere" . What the hell was that ? I hope to have Justin over soon to do a serious beer review in the exclusive "lonebiker.com beer testing lab"

In the end , I enjoyed mine quite a bit and so did Justin .

Justin gave the Sleemans 4 suds out of 5 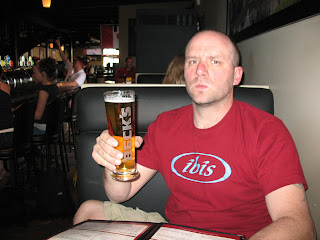