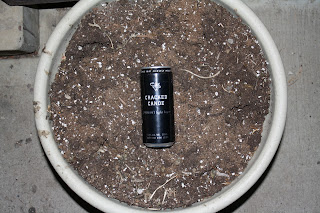 Yes , this is a day early as I am starting this Thanksgiving long weekend a little early . Why ? you ask . Cause dang ! This weather kicks ass !

Cracked Canoe comes from Moosehead Breweries , Canada`s oldest breweries formed in 1867 sometime before the birth of the ipod  . Located in Saint John , New Brunswick it was started by the Oland family and still is owned by the Oland family six generations later . The brewery is the last big brewery that is 100 % Canadian. Take that Molson Canadian ya bunch of posers !

Cracked Canoe is one of the beers in their long line of great Canadian beer . The key ingredient according to Moosehead , "patience" . This reviewers nostrils are still plugged up from that bitch "the allergy fairy" so no aroma testing ensued tonight . This reviewer didn`t pour it into a glass either as he is a lazy little shit . I tell you what though , the first taste .......mmmmm , o.k I guess . It is light beer so you can`t expect much from it . It`s not bad but I certainly wouldn`t knock old ladies over at the liquor store to buy some .