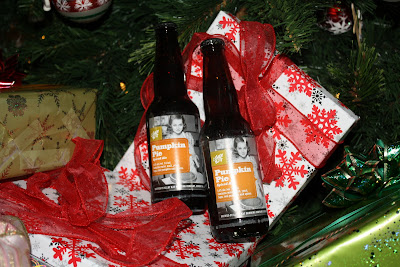 On a special "Christmas edition" we bring you a special seasonal brew from just down the road . Edmonton , home of Alley Kat brewing , great mountain biking , countless number of Edmontonians , the five time winning Stanley Cup Champions , the Oilers (that`s four more then the Flames , but who`s counting ?), and most importantly , land of all those fantastic lonebiker bike rides .

The seasonal beer we are reviewing is for the Fall ...Hence , the pumpkin pie . Once again I looked for a Christmas beer and came up empty . A thorough search through a couple liquor stores and this was the closest beer I could find that resembled "holiday season" . So please don`t write me angry letters filled with angry F-bombs telling me what I`m doing wrong . And you know what ? It isn`t polite to type bad words like that , especially on Christmas , you should be ashamed .

This is the first beer that got reviewed on lonebiker that is from our fair city , and after fourteen months of beer reviews I feel ashamed .... I`m sorry Edmonton . I let you down ! I hope you have it in your heart to forgive me . Alley Kat started in 1994 and is the fourth oldest brewery in the city of Edmonton . I could not find anything on the Pumpkin pie spiced ale that I am trying tonight as time has passed on and it is now Winter , not Fall .

The pour brought on an orange golden color with a small head that dissolved fast . The smell was an event as it invaded my nostrils with a talanted classical musical symphony full of Autumn aroma ....And I`m stuffed up and sick . I couldn`t imagine being free and healthy and smelling this ! It smells like Fall ! How awesome is that ? The taste was great considering I had serious doubts on this one . Pumpkin is clearly evident but not overwhelming with a small hint of hops to compliment this seasonal brew . If you are lucky to find this now . Try it ! You may not want to have more then two in one sitting though . 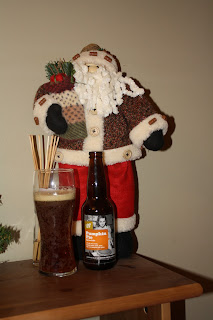