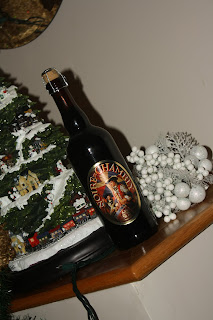 All right , if you guessed that this beer was French , back slowly away from your computer , television , mobile phone , or ipad and give yourself a well deserved slow clap . Give it two to three minutes of well motivated slow clapping and then stop . You can now finish this review Mr/Mrs Smarty Pants . Unibroue is brewed deep in the heart of Quebec in the town of  Chambly , home of the historic Chambly canal . Unibroue was created in 1990 when two chaps started a brewery to tap into the craft beer market . Craft beer generally is beer that does not suck . It is beer that has had lots of arduous hours spent perfecting , so you better enjoy it punks , or somebody`s gonna have a fit !

Noire De Chambly was created in honour of the brave men of the who wore Musketeer hats and fought against the Iroquois helping defend the colony . Many French Canadians are direct descendants from the men of Carignan-Salieres Regimen and the people they help protect . If you want to know more just freakin  google it o.k !

The pour was an event as a massive head was formed that took longer then normal to dissolve . Yes it was a bottle and I poured it going against the beer review standard of drinking straight from the bottle . Once the head finally dissolved I took a big sniff and got a whiff of chocolate , coffee , and strawberry pez (just kidding on that last one) . The taste took me back to one of the last good craft beer reviews I did on here . Why do people drink garbage beer I ask ? Cause this good stuff is expensive ......Ah , yes . good answer ! A good malty , wooden taste to this stout .  I strongly recommend trying it .