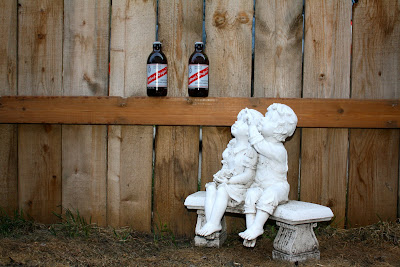 Welcome to Beer Friday. The most exciting thing to hit the internet since that awesome garage sale deal site that swept the county of Ranchland in 2002. From perhaps one of the coolest island countries ever. Jamaica, we bring you Red Stripe. The first Red Stripe beer came flowing down glorious taps in 1928 in Surrey Jamaica. The beer has gained worldwide recognition and is now brewed in the United Kingdom, the United States and some other country named Canada.

The Lonebiker empire spared no expense and got real Red Stripe imported right from Jamaica (I know, cause it say`s on the bottle). In what looks like some sort of cough syrup medication for a bottle, some may be a bit reluctant to try it. I think it`s adventurous! With beer in bottles like this, your imagination can take you on some wild trips...but we won`t go there.

If you know a thing or two about Jamaica you would say they are relaxed. The commercial below is evidence of that. This is a country that knows a thing or two about taking it easy. Seeing how everyone here is rushed and stressed most of their lives, I envy them. Life shouldn`t be rushed. It`s short.

The beer was poured into one of my tiny Ikea glasses and it just about took the whole bottle. At only 330ml, I think I was right about the cough syrup for a bottle. These things are tiny. It poured a nice Golden straw colour and a short head dissipated in the time of a good Pixies song. The first sip was done by my lovely wife and was given a thumbs up. Sadly though, the beer had to be judged by me "the expert" and I saw that it was a little nervous (you can tell cause the bubbles wiggle as they go up). Well good news Red Stripe! Your good! Each sip did not dissapoint. It is a simple beer that doesn`t slap you in the face or make you ask yourself "what is this shite I`m drinking?"