A tale of two rides 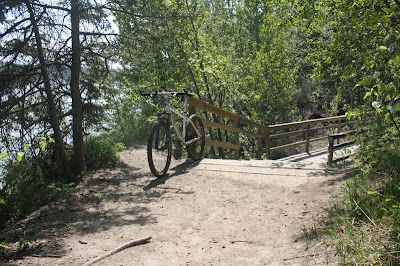 I had high hopes for today but sadly they fell a little short. I blame the weather... Yes, the weather. It was the weathers fault!

With the family taking off for the lake. I had access to 13 hours of guilt free riding (other then the guilt of not going to the lake). I had planned on taking all three working bikes on a ride. Ride one was really the only one worth posting, the third one didn`t even happen, and the second was a giant waste of gas in a trip to Fort Saskatchewan.


The first ride of the day took place in a spot I never start. Emily Murphy, on a bike I never really ride in good weather, The winter warrior, Stumpjumper. The weather was stupendous for my trip from Emily to Mckinnon via Whorelak. It`s a good sign of Summer once all the douchebags make their appearance in Edmonton`s busiest park. "How come those guys circling around in their loud cars with the loud stereos never have girls with them? " I always`s wonder. I guess the answer is simple, but we won`t go there will we? I crossed the bridge stopped for tea with Daryl Katz, and then rode through Mckinnon. Needing more I hit the Groat road roller coaster, hit the museum hill and rode the River Valley Road and was amazed at the sheer number of full back tattoos I saw on guys. I remember a day when it was cool and original to actually have tattoos, I think people who have no tattoos now are unique....weird!
Ride two was planned to start in Mill Creek on the Moots. The drive out it in a downpour made me just about turn around as I had no rain gear with me. When suddenly a shaft of light emitted from the direction of Fort Saskatchewan. Was this a sign to ride there? I quickly cut off a cab driver and hit the Henday and was off to my favourite little riding hole.

The ride started good. A little sore from earlier, but no big deal. Then a wipeout on a sharp climb, and soon my bike mojo withered away faster then Harold Campings predictions. At the 4 km mark I turned around, tail between my legs, head down, another collision with a tree that what seemed jeopardized my camelback. I had bonked...Why?

I got nowhere near to reaching my goal but it seemed to go along with the theme of the weekend. I planned on heading to Fort Saskatchewan tomorrow but heard there were sheets of rain there as this was typed. I`m guessing that shaft of light was just magical refinery cancer dust now...