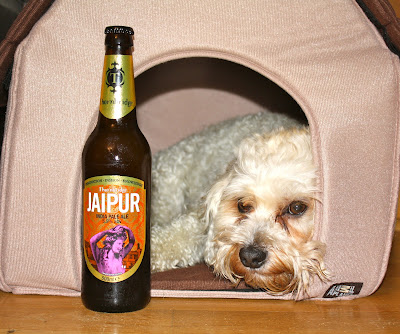 Instead I picked up a beauty from the United Kingdom. Thornbridge brewery located in Bakewell, Derbyshire. It was founded in 2005 and from the looks of the website looks like it is doing very well for itself. According to Wikipedia they have won over 130 awards since they started! Holy shit Batman! That's some pretty good work! With that being said beer sales are through the roof and the company is thriving like the rain is on our poor trails this year.

Jaipur, India Pale Ale is one of the UK's 50 finest food and drinks according to the guild of fine foods experts in the annual great taste accreditation... Whatever the hell that means? It sounds pretty damn good though so that is why it is on their website and I put it on here. I poured and it showed a rather golden milky hue. The clouds in the glass were almost inspiring and I almost started to cry, but then I realized I was listening to "Codex" by Radiohead and brothers and sisters, if that don't give you goosebumps and make you want to cry then you are broken.

The first sip went down heavenly. Fruitiness mixed with the usual hops assaulted my taste buds and it slapped me with a bitter aftertaste. A few more sips and I could detect honey and that mean aftertaste seemed to be gone. It settled down nicely and I am still enjoying the last of this fine beer as I write this, proving a fine beer can be savoured, although I am angry I didn't have more knowing it will be washed down with something quite crappy in the next hour as I settle in for a few more to start the weekend. 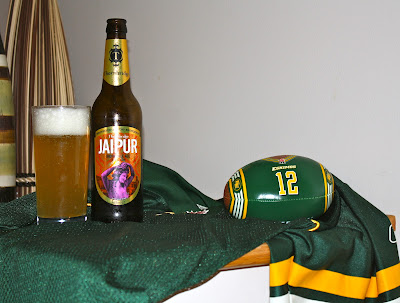