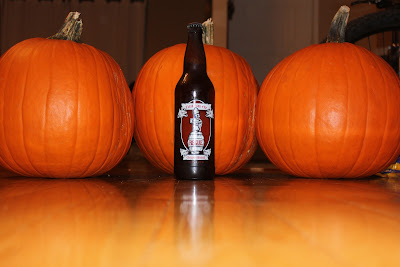 Well, well, well... Two posts in one day! Is this another true sign the Mayans were right and not just being a bunch of douchebags? No, it isn't. It is just a strange coincidence, that is all, although getting a bike ride in and then getting to do a beer review later has me just tickled pink. Which is much better than my state as of late... Bitchy.

This is the third appearance of Rogue brewery to this fine institution known as "lonebiker beer reviews incorporated." Rogue which is headquartered in Oregon, one of the finest states going. I mean that with full conviction. You Oregon! You are awesome! The brewery opened it's doors in 1988 in Ashland, a year later they opened in Newport which inevitably became the headquarters for this kickass craft beer God. The company has countless brews to it's name and one of them is Dead Guy Ale. A beer made for the day of the dead on the Mayan calender (irony) which is on November first. The beer is heavily favored by hippies as to the connection with the Grateful Dead which is purely coincidental according to Rogue. So if you are drinking one of these: Beware! Hippies may appear. Some great hippie repellent I find useful is a bar of soap or a Globe & Mail. So if you don't want to be bothered drinking Dead Guy Ale I suggest you carry one of those items. They will bounce pretty quick once you pull out on of those said items.

The pour was smooth and a darker angrier beer showed itself topped off with a one and a half fingered head. The head didn't last too long and was long gone once the photo shoot and photo uploads were complete. The sips came and went and are still on going as I type away and let me tell you something. I am digging the Dead Guy Ale! A heavy malt adorned with nuts and a slight chocolate taste that actually was a tad bitter but still made me happy. At 6.5% it is a bad beer that could catch you and make you it's bitch if your not careful, but it's good so be wise when sampling this one. 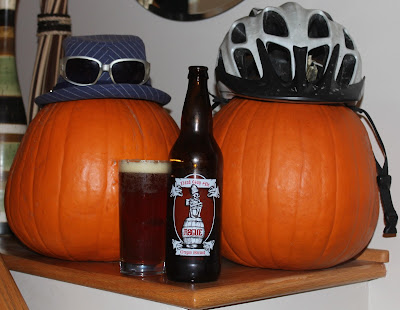