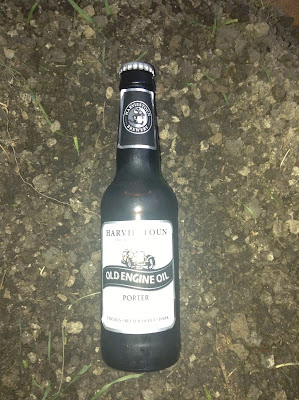 First off, my apologies for the shitty looking pictures, in this current condition I did not feel like hobbling about downstairs to fetch the nice camera. I could have gotten someone to get it for me but I'm tired of asking for favours. I had help with this picture set up that was taken with an iPod whilst balancing on crutches. Last week someone else took the pictures. This week it was me. I call that progress...

Harviestoun was founded in 1983 by a fine Scottish chap by the name of Ken Brooker in a town I'm not even going to attempt typing in Scotland. Yes I could have copied and pasted it but you know I'm all the way over here now. This brewery started in the mans shed and now has grown with seventeen employees in a warehouse. A brewery that doesn't want to grow too large perhaps? A small brewery that seems to win lots of awards. I stand up and salute you!

Written on the outside of this bottle is "vicious, bittersweet, dark" and with a name like old engine oil you should know this is one dark angry bitch of a beer. I truly was afraid to open it and pour it thinking back to all the times I changed motor oil and seeing how dark and shitty it looked. "How could someone name a beer after that!?" I quivered standing behind my wife as she opened it for me, and not for reasons being of a broken ankle. Reasons of being deathly afraid of this bad ass beer. Once in the glass it was motor oil that it resembled and the first sip was quite spectacular. Very smooth loaded with chocolate and roasted malts, dare I say the taste of leather had wrought itself in there? How does one know what leather tastes like? I have no idea but that's just what I got. If you can find this one and enjoy fine craft beer. get it. 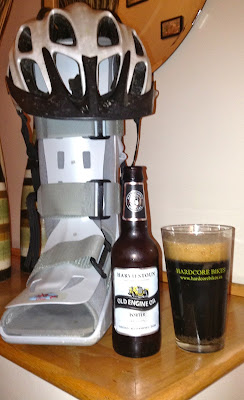