The post on my first full day back could be described as a bit controversial. What normally happens before I post something, I do a quick read to check for errors (yes, still a lot get missed) hit publish and then forget about it till the next day. I will wake up the next day with my french press coffee in bed also known as 'The Golden hour' and read Lonebiker or try to read it as an outsider.

Not sure if that makes sense.

Some text messages from some brethren members asking why I was so grumpy on my phone made me go straight to the iPad and read the post in the morning.

Yes. I may have gone a little too far in regards to the name calling in whom may be responsible for these drastic changes to fun and challenging parts of the trail. For that if the one reading this is responsible I apologize. Quite immature from my side and reading that post over again is a bit embarrassing and I know I am a much better person than that but sadly stooped to a pretty big low.

Seeing the life the post has taken on is why I am doing a follow up. The blog posting hits it has gotten is quite huge which tells me that people are emailing it to one another. That is a bit disconcerting.

This is not how I want Lonebiker to be viewed. I've always thought of it as ones take on riding in the Edmonton river valley. Pictures and hopefully some good writing would compliment each bike ride and hopefully promote riding in Edmonton.

Well truth be told, I started this Lonebiker thing just for me. It is a ride diary that has grown quite a bit since it was started.

All this being said, I am still strongly against these changes to challenging sections of the trails that is happening. I also know that most mountain bikers in the Edmonton area would stand with me on this one.

I did get a rather disturbing email from someone whom I believe is affiliated with one of Edmonton's Mountain bike associations. Pure speculation on my side.

This email made the bad vibes in The Pussification Trail Saboteurs post seem like an innocent kindergarten poem. I was going to post the email on here but have decided against it. Other people who have read this email could not believe the vulgarity combined with hate and spite that was thrown my way. All in response to a ride post where I complained (loudly and perhaps distastefully) about a trail change.

I was accused of:

Having no idea what mountain bike associations do.

Never stopping my bike to clear garbage or debris on a trail. Or any sort of trail work.

I am clueless about what goes on in the Edmonton bike community.

'I am one of those guys that ride and than just fucking bitch' (in emailers words.)

I was then told he can outride me on technical trail into the fucking ground (again, emailers words.) I'm sure he can, and good for him. To me that's not what mountain biking is all about.

As far as me, Lonebiker and the many mountain bike associations. I have great respect for them. Without them promoting mountain biking in Edmonton it would be a whole lot more boring riding here. They do hours and hours of volunteer work whether on trails or working with the city and promoting more bike access. Whether an association or a trail fairy is behind the trail pussification changes (as I call it) is up to them. They have their reasoning which I will disagree with. Yet, if they are re-working old trails and opening up kilometres of great new singletrack. I will take the good with the bad with a smile on my face at the end of the day.

What All these associations should understand though is there will always be critics. No matter what they do people will talk and either approve or disapprove as to what happens to trails in the river valley. I have a blog so my voice is a little louder than the rest.

I love progression but if there is more dumbing down of hard trails I will speak about it on here so please don't be offended. I'm not saying who it is doing it but after that email I received a lot of the fingers point their way. I always thought it was trail runners changing these sections of trail and it could be.

As far as the author of the email, Dude! relax, retire from Your association and enjoy life. I know that your attitude is not what Edmonton mountain bike culture represents and it was very disappointing to see this come from an organization that I have lots of respect for.  I was always thinking the president of Costco was going to send me a hateful email. Not from someone in our own bike community.

Anyways... Cheers kids. The traffic I am getting on here is at an all time high and I thank you!

Comments are now open again as long as not too many of you lavish in telling me how big of a dick you think I am. Or someones Mother doesn't start commenting.

This would be easy to do... or so you would think. When choosing the worst rides ever posted on here we decided to post the rides that had t... 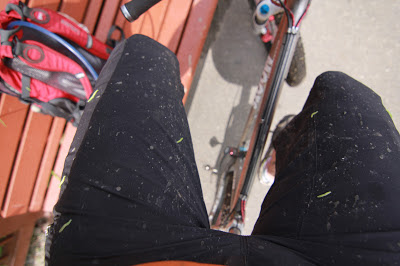