I hate to see this , condolences to the families .... 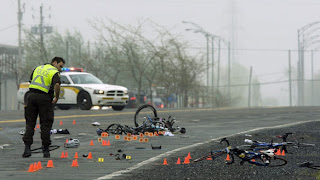 A Quebec coroner says a stretch of highway east of Montreal where three cyclists were killed and three others were injured is dangerous because it does not have a paved shoulder.

The six cyclists, all from Montreal's South Shore suburbs, were training for a triathlon along Highway 112 on Friday when they were struck from behind by a pickup truck.

The three women who died have been identified as Sandra de la Garza Aguilar, 36, of Saint-Bruno-de-Montarville; Lyn Duhamel, 39, of Boucherville; and Christine Deschamps, 44, of Brossard.

Coroner André Dandavino, who is investigating the accident, said Saturday the four-lane road needs to have a paved shoulder so that cyclists can be safe. He also said many of Quebec's roads have been neglected in the last 20 years.

Dandavino said he would investigate whether the driver of the truck was on cruise control at the time of the accident.

Suzanne Lareau, president of cycling advocacy group Vélo Québec, said the cyclists might have had more room on the highway if the shoulder had been paved.

Under Quebec highway rules, any road travelled by more than 5,000 vehicles a day must have paved shoulders.

Cyclists Sandra de la Garza Aguilar, left, and Christine Deschamps, were killed when they were struck by a pickup truck in Rougemont, Que. A third cyclist, Lyn Duhamel, also died. (Saint-Lambert Triathlon Club/CBC)"I can't understand why on this part of the road, why the shoulder was not paved," said Lareau.

Officials with Quebec's Transport Ministry said the province had planned to repave the section of the highway where the crash occurred, and would also pave the shoulders. Work is to start in the next few weeks, said ministry spokeswoman Julie Morin.

The six cyclists were members of the Saint-Lambert Triathlon Club and were training for a competition in Lake Placid, N.Y., in July.

Shortly before the crash the survivors had been riding two by two, said a spokesman for the club, Eric Lemyre, but they returned to a single file formation because there was no paved shoulder.

Marc Villeneuve, a resident in the region, said he regularly rides around Rougemont but doesn't use Highway 112 because it has no paved shoulders.

"I avoid that area," he told CBC News, standing near the crash scene. "There is no shoulder on the road. So even if the car [lanes] are doubled on each side, the traffic is very fast and there's gravel on the [side]. It's very dangerous."

Jean Dessureault, one of the three cyclists injured in the crash, described the accident as a "bowling match."

"I felt like I was flying and everyone around me was flying," Dessureault said.

The crash scene stretched more than 30 metres along Highway 112 near Rougemont, strewn with mangled bike frames, shoes, water bottles and a wristwatch.

The pickup struck them just before 10 a.m. ET. The truck driver, who was heading east, was not injured. Police said he rushed to help the cyclists and gave first aid.

Alcohol "is not a factor," said Quebec provincial police Sgt. Claude Denis. He said it was too soon to say what caused the accident or whether charges would be laid.

The crash closely resembled an incident last summer in Ottawa, when five cyclists were struck on March Road.

None of them died, but one spent months in hospital. The driver in that case has been charged with hit and run.