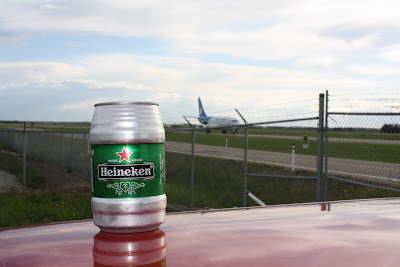 From the third biggest beer company in the world we bring you Heineken . The favorite beer of trendy bar dorks everywhere . If you want to look cool at a party I suggest you buy a six pack of these babies to really impress your friends and all the chicks ! People will say ....oooh , he is drinking Heineken , he must be cool ! And a little bit exotic !

Well , to hell with trying to be cool . This is a beer review and that`s what`s going down . Heineken is from Amsterdam which shocked me a little cause I always thought it was German . It was founded in 1864 and is now very popular worldwide . The beer was even in an Austin Powers movie when Austin said "get your hands off my hiney" (he was referring to his beer) .... HA HA HA .

I have had this beer many times before (at the bar and at parties) and always enjoyed it . Tonight though it gets tested . I didn`t pour this into a glass as I am a shitty beer reviewer and just drank from the can . I can`t get much of an odor as my nose is plugged from the evil allergy fairy . The taste is a little off as the allergies are quite bad therefore making this beer review even shittier then ever .

I don`t mind the taste as it is quite common with all the major beer brands (Bud , Coors) with a light skunky aftertaste ....Maybe skunky is the wrong word but that is what it is too me .