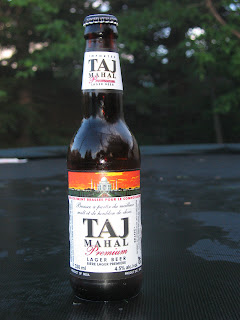 O.K , I will give you 10 seconds to guess where tonight`s beer is from ..................Times up ! I was wanting the city it was from , so you all are losers , except for you you . The one in the white t-shirt with the backwards steelers ballcap , you win the prize ! Once there is lonebiker merchandise available you will get a free pair of boxers ! How awesome will you be !!! The city is Bangalore and yes , that is in India . Taj Mahal is brewed by United Breweries which was established in 1857 . You may have heard of Kingfisher beer , which is the flagship of United Breweries .

Being as this is a pretty cool looking beer , I poured it into a pint and watched the two finger head dissolve into a golden flavorful looking brew below . The smell was similar to all the popular beers you would get here ......and so was the taste "average" it has no bad aftertaste , yet not too exciting . I can`t find anything bad to say about this one though , but can`t find much good to say either .