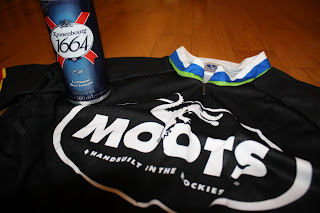 Bonjour , avec la rouge ole Bier Friday . Je ne se pel avo le.......... I don`t know what the hell I`m talking about ! Welcome to Beer Friday . The Stupid Edition ! Kronenbourg is brewed in Strasbourg France , and like all french stuff it`s thankfully far , far , far away !  HA HA HA HA HA ......Oh , I kill me , I really do ! Now that I just remembered I live in Beaumont I just smacked myself back to reality . This brewery was started in 1664 , I believe soon after Jesus walked the earth . Kronenbourg beer is now owned by Carlsberg . 1664 is Kronenbourg`s flagship brew .

The beer poured a nice golden yellow with a large head that dissolved in a moderate rate of time (does beerhead dissolving time really mean jackshit ?) . The first few sips went down nice and smooth and you know what boy`s and girl`s ........So did the rest ! This was a damn good beer and I wished I bought more then just one ! If you see this one in a store buy it , you will be happy you did ! < see , exclamation point . That means I really liked it.