O.K , it was still a good long ride , but nowhere near where I wanted to end up . I blame myself on being too overambitious on the pre ride planning , no wait I blame a poor running drivetrain , no I blame the weather . There were a number of small factors that lead to the demise of a good long ride , and by long I mean loooong ! I had planned to do another end to end ride with quite a few different destinations . I had planned this ride for a few months as it is the last long weekend of summer .

I started in Mill Creek and rode to Beverly bridge , crossed and rode in the science park and tried to figure out how anybody could like riding there . That place has the flow of Bill Gates dancing at a hip hop convention . From the aerobic aspect that place can be quite challenging , so I guess..... 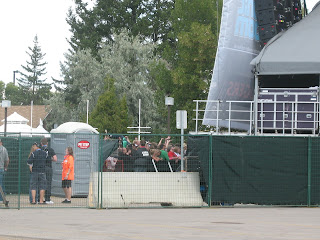 I rode up to Sonic`s big concert and was looking backstage all creepy like hoping to get a picture of somebody but there were sadly a bunch of nobody`s .

The weather wasn`t too friendly and I was not prepared for it . It was almost cool enough to be wearing my sexy arm , and knee tights but I left them at home . The rain soaked me pretty good on the east side crossing the Beverly bridge . Coming back through the valley I saw some some dumbass riding topless ........Sadly it was a guy .