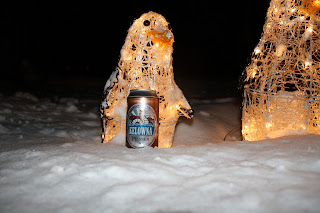 First , I sadly must come out and say that the Christmas beer reviews have stopped quicker than Mel Gibson`s career . After an exhaustive search through some Edmonton liquor merchants I came up with nothing . So I give you Kelowna Pilsner from a now lonebiker three peat . The Tree brewing company company located in Kelowna, British Columbia, land of "life is really , really good and the riding is just fine " . Oh! Now I know why I`m drawn to them !

Kelowna Pilsner poured bold ,  proud , and gold . Much like that would be something from the great city of Kelowna . A two fingered head that dissipated quite quickly . It had the smell of some European beers that I have tried , nice and malty .  I didn`t do any backflips while drinking this one . The first taste was a tad meager in the taste department , but it does get better as the glass gets emptier . This one does remind me of some of the European beers that I`ve tried .