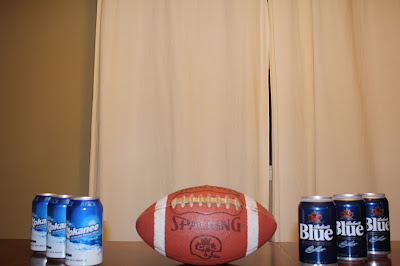 With the Grey Cup a mere two day the feeling was to do a battle royale between two beers that best represented the teams playing.

In the East, Labatt Blue representing the Winnipeg Blue Bombers. The west brings us Kokanee for the B.C Lions. Two beers that were reviewed on this site already if you just hit the links. The battle will feature everything about these beers that I feel like talking about at this given time, and they will be awarded points and it will be a guarantee lock to see who will win the Grey Cup! So if you plan on making a few bets I suggest you pay attention sucka!

History. Kokanee was a niche brand of beer in the B.C interior and was bought ironically (only to this review) by Labatt in 1974 and the brand grew more popular with some clever advertising. Labatt Blue's history goes back further to 1954 when Labatt started a new Pilsener Lager and named it after the Winnipeg Blue Bombers. That alone gives Labatt a 10-0 lead after the first quarter, cause that my friends is pretty cool to have a beer named after your football team.

The overall appearance and with that marketing was something else that scored points, Blue was appropriately blue and featured a maple leaf with some wheat on it that made me feel all warm and fuzzy, but Kokanee features the mountains covered in snow bringing lustful dreams of playing in the holiest of holies. 10-7 Blue. A long search of youtube videos from both beers brought annoyance and frustration as to why it's so hard to find a good beer commercial. Kokanee wins this one hands down once I saw and remembered they put cute girls on mountain bikes and then put that on t.v. 14-10 Kokanee, halftime.

The pour gave us much of the same from both as far as colour goes, Kokanee retained it's head much longer giving them a late 3rd quarter field goal, the taste was close and looking at the archives I gave both beers 3.5 suds out of 5. Is this close or what? Drinking the beers head to head sadly gave me no real deciding factor on which one is better. They are both a bit above ordinary. With the final sip going down between these two I'd have to give a  slight edge to Kokanee, but very slight. That looks like a safety to me... 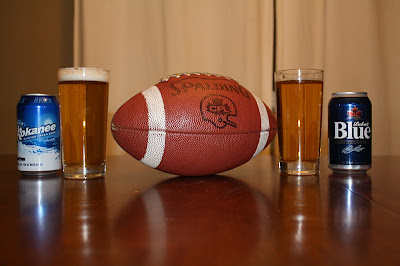