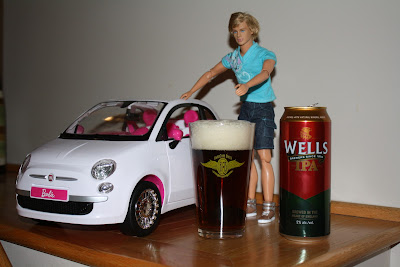 I had wanted to do the first ever wine review on here tonight but was shut down by the higher ups that be. Well the higher ups being NFL football, and realizing I'm not allowed to drink wine on such a sanctimonious weekend of divisional playoffs. Oddly enough I didn't have a drip of beer until now; a good twenty minutes after the last game. So I guess I could have had the wine... You see how I sometimes over think things! This happens quite a bit and can be quite serious and thankfully have meds to take care of my problems. Sadly two of those "meds" are put away for the season and the one that "goes" is having the bicycle version of a quadruple tripass.

Wells makes it's home in England and is actually named Wells & Young's brewery after a merger between Charles Wells Brewery and Young's in 2006. The company is  very proud to be independent and between the two has over twenty five beers in their lineup.

Wells IPA is the leading imported India Pale Ale coming into Canada which is probably why I found it so easily on a somewhat cold snowy Beaumont night. Or is it that Beaumont liquor stores are quite competitive as there is four with a rumoured fifth opening up in such a small town... Fubar

The pour was unsuccessful as I was holding the glass the wrong way giving my a large head of foam that would have been useful if a jetliner crashed into my front yard. The smell was somewhat different compared to most common beers. Fruity hoppy goodness made its way into my nostrils and I was delighted. The taste was a tad nutty (Austin Powers forever ruined that reference) and slightly metallic when drunk from the can. That's why you pour beer into cups kids! As I did...