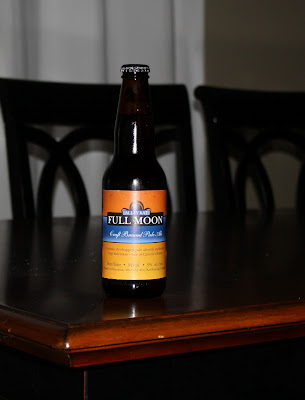 I now pronounce the week over! It's Saturday night, I just worked all day and it's time to review some beer damnit! My one day weekend is off to a good start but I guess but it would be a whole lot better with a bike ride tomorrow now wouldn't it? Hey! How about a bike ride right now? Oh that's just a dumb idea, but coming home and watching some decent (professional) Pinkbike videos for an hour on my iPad has made me yearn hard for the bike. It is going to be a showdown of family vs bike tomorrow  so we will see who wins wont we?

Alley Kat makes its third showing on here. A brewery right in the heart of Edmonton! I feel my pride burst whenever I pull an Alley Kat product off the shelf. Only this time it isn't one of their seasonal beers that is being put to the test. Full Moon is in their starting line up. Full Moon is one of the beers out there representing Alley Kat. These are not one of the beers being called in once a year from  the minor leagues. This is big time baby!

Full Moon came in a six pack with 341 ml bottles. If you live in the Edmonton area it would be very easy to get, if you don't well.... Described in the website as a "west coast ale that is both kettle hopped and dry hopped with centennial and cascades." I would be lying if I told you I know what the hell that means. So I will keep typing as if I know what the fuck I am talking about! Oh I'm sorry, I'm a little bit grumpy from too much work and too little bike time... I poured the first one and had the second from the bottle. The pour was impressive as a big head showed up and took full command of the room! Much like a Chuck Norris would do! A good three fingered head was evident for some time. The first sip was what a good craft beer was meant for! It was full of hops and has a nice balance of malt with what I could detect a citrusy flavor. Grapefruit maybe? Who knows... All I know is, this stuff is great! 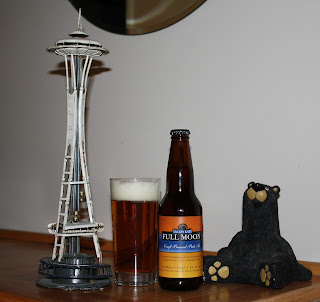