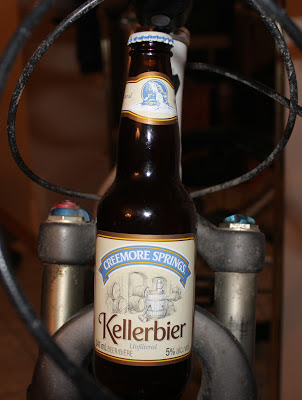 Greetings form a well hidden bunker deep in the bowels of lonebiker headquarters deep inside the frigid cold Canadian North. We bring to you a beer that is brewed in Creemore Ontario. A fine village located south of Lake Huron. Being from Alberta, it's a lake you don't hear much about... Ever. It's one of the "Great ones" too.  I blame Toronto. Why? Cause the rest of Canada blames the giant behemoth city for all their problems and concerns don't they? That's what happens when you get big. People hate you. So screw you Toronto! Screw you and your largeness! I feel good saying that.

This is the second appearance Creemore Springs made on here now. As stated earlier, they hail from the village of Creemore. This brewery opened in nineteen eighty seven and likes to be known for not using preservatives in the brewing process. According to Wiki they were acquired by Molson in two thousand and five which saddened me when I read it. Yet again, I'm sure the original owners were well taken care of.

Kellerbier is their German offering and I poured it with a heightened sense of worry, cause you know. Those Germans can be mean mofo's you know! After rising up from behind the counter assuring myself things were safe I admired the cloudy somewhat dirty golden colour that this beer represented itself with.  It was ugly and rather mean looking capped off with a one fingered head. I was intrigued. The smell was hard to distinguish all thanks to a stuffed nose which really is quite annoying. Anyways, the taste was filled with hoppy goodness, a bit of citrus was detected, it had a balanced taste with a tad of bitterness to it. This one would be a good beer for a fine Friday evening like the one I'm experiencing. 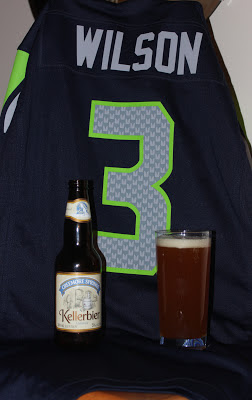