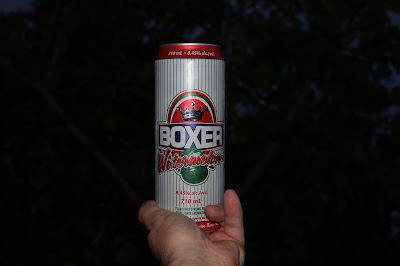 As I end week seven of a fun filled broken ankle Summer, today entailed with being injected with a radioactive substance and two hours of being placed inside a machine which took images, oddly enough they didn't seem to worried about the ankle and focused on one of my arms. I tried yelling and pleading awkwardly to focus on the ankle but nope. Nevertheless, the results of today come next week and should warrant some interesting explanations.

This weeks beer was delivered by a thoughtful person who I believe has only one mission. Give me a hangover! 8.45% alcohol content filled up in a giant 710ml can is awfully deceiving. Why? They put watermelon all over the label, yes watermelon! Watermelon is by far one of the cutest fruits out there next to maybe Starfruit and they combined it with 8.45% alcohol infused beer! Who are these madmen?  Minhas craft brewery in Monroe, Wisconsin which dates all the way back to 1860. A time where men were probably real men and didn't drink watermelon flavored beer, even if it was laced with a high alcohol content. Minhas has a brewery in Calgary, Alberta which is where I'm sure this was born.

The pour was an adventure as it didn't show the slightest inkling of a head. It was more carbonated than it was beer and slight shades of fizz tried showing itself, all the while I'm sure the alcohol curb stomped that that little bitch known as fizz into not being all wimpy and fizzy. Alcohol can be such an asshole sometimes. As expected a heavy smell of watermelon was had when I bent down and sniffed it's pink... Shall I say beauty? No, I'm sorry beautiful beer is dark or Golden. This has the image of something a group of ditsy 15 year old girls would drink at a house party. How incredibly sad! I took this beer down into the beer testing lab accompanied by an army of beer researchers and took a sip... "Holy Shit!" I exclaimed! "It does taste like watermelon!" a stunned silence fell over the lab. This is why they put me in charge of this here blog. As I continued with this one the alcohol didn't show itself too badly, the taste of Jolly Rancher and fake watermelon fill in all the rest of the details. I'm sorry, I cannot for the life of me call this beer. At least the high alcohol content will numb the pain in my ankle, and oh yes... my arm. 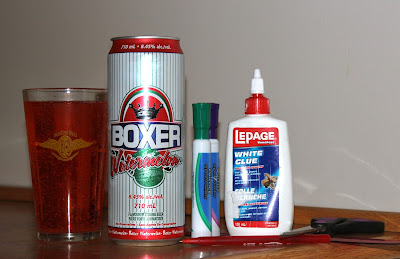