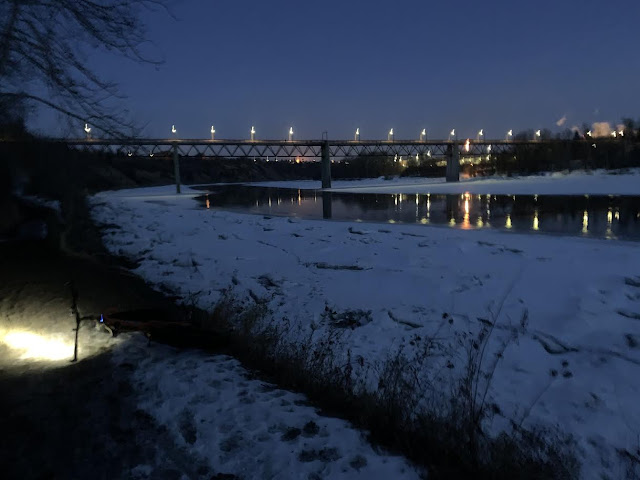 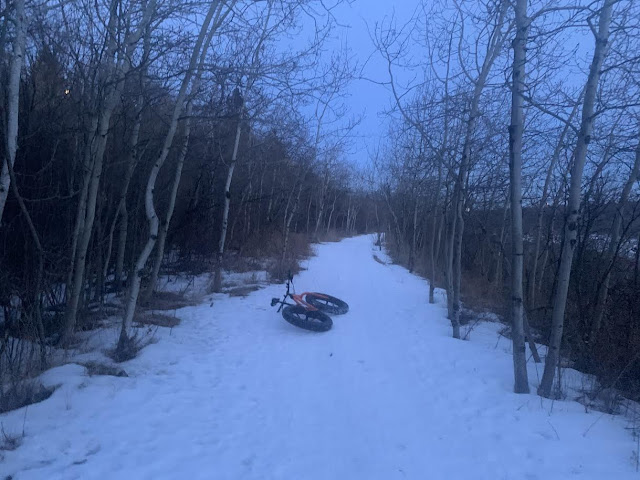 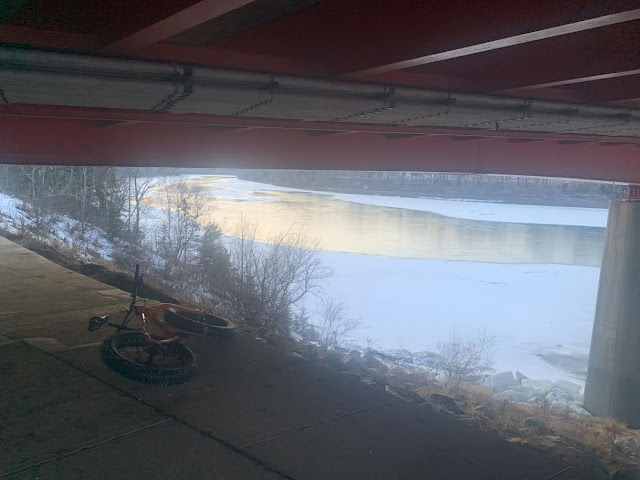 What will probably be the last ride for the set was a short one from Capilano park through Risky Business, Andres... until I found the magnificent little blue bridge where I crossed and I rode the singletrack in Kinniard, Dawson.

Signs of impending doom for the 2020-2021 fat biking season was out in droves today as any sun exposed trails were getting quite beat up. The ones I rode on were still rideable but will be pure slop soon, the usual people will keep riding them but if you are any sort of decent human you will stay away and let them dry out.

A short lived attempt to find the entrance in the looming darkness to Snake Back to ride.. Well hike a bike to the top and ride down my new found little connector was shut down when I thought of having to push the bike up a lot of the sections. I took Low Class where I hooked up with the multi use that runs along the river.

It was wet and quite gross.

I planned on riding the top of the valley and dropping into Rundle to extend my range with a very possible return on Gold Digger which would have made the ending quite great. Instead, still wet from the multi use and quite tired I bailed out and returned home. 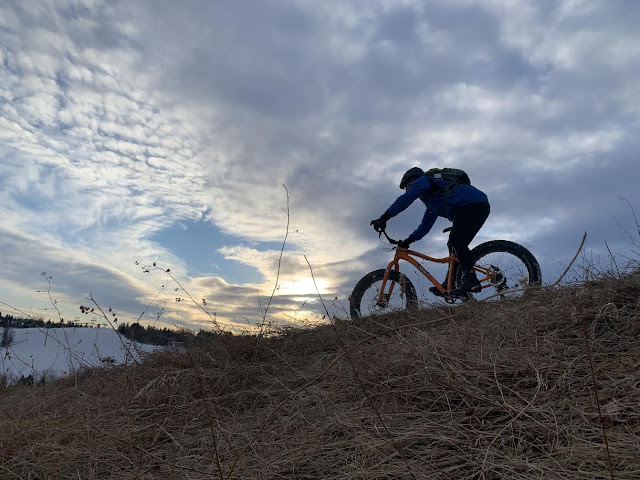 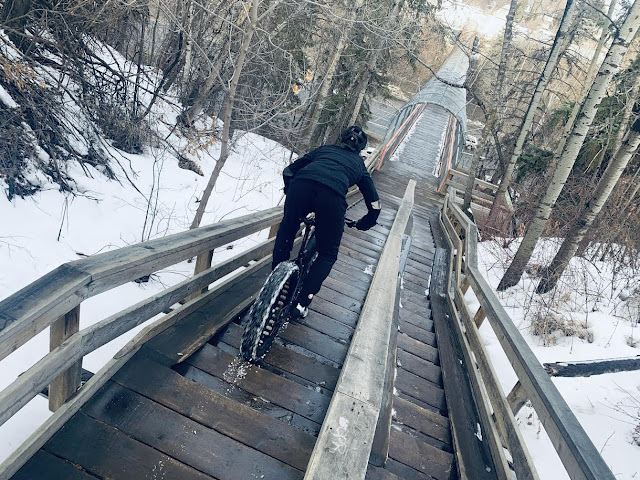 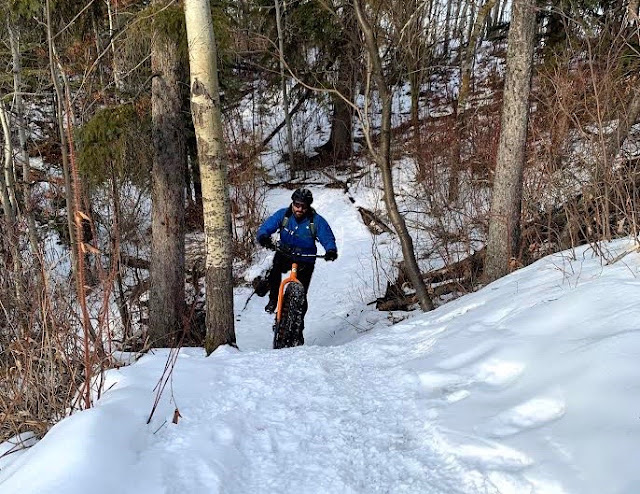 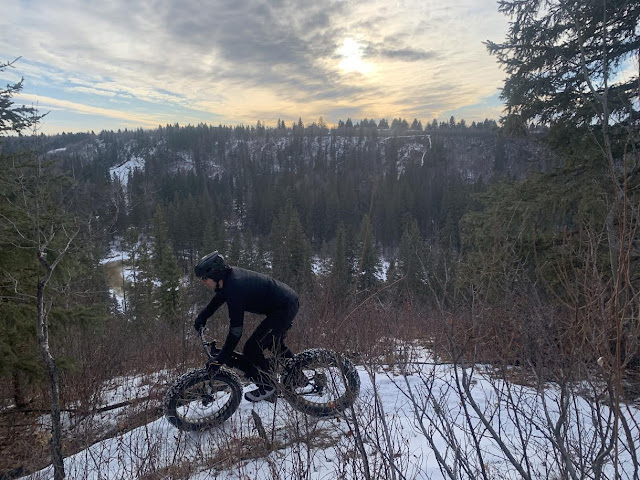 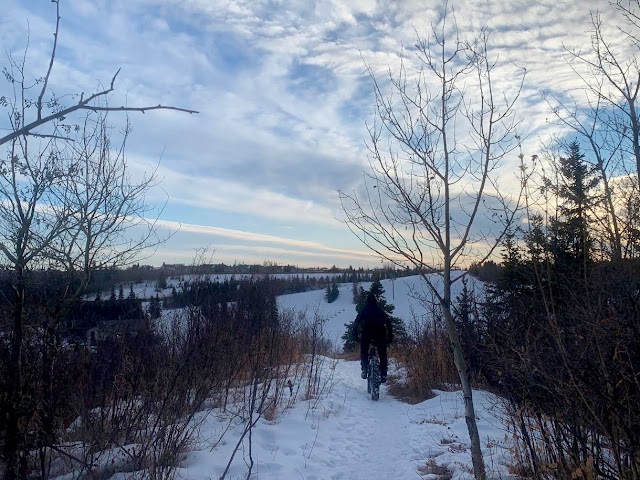 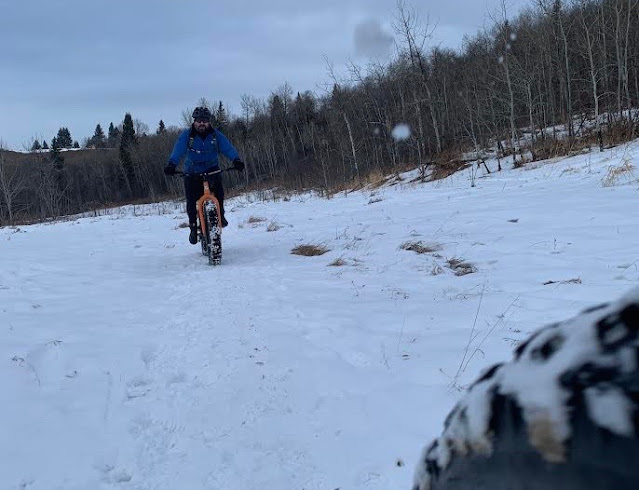 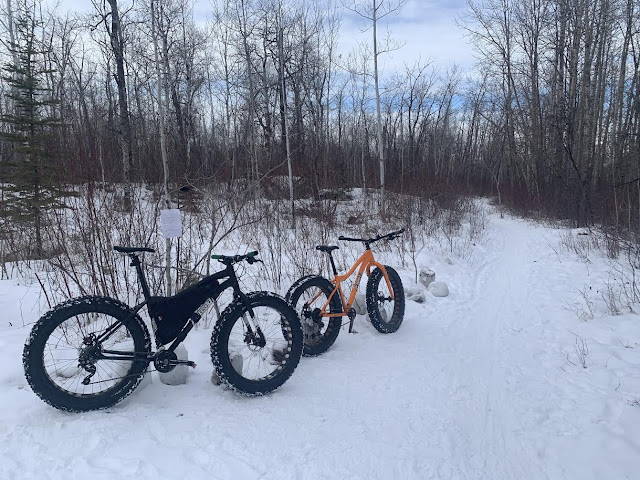 Both parties involved in the ride today would probably have been better off at home on the couch watching Netflix but now that it is all over we knew we had taken the better option, well that just goes without saying it now does it? Nights still affecting myself and Kent dealing with the changing seasons or maybe we are sadly getting old as dirt..

A Kent meet up in Terwillegar as we departed his place and found Fireman's Descent where there were no fat bike tracks. Now isn't there an overload of new riders and a large amount of people riding in general? I do know the Fireman area can be dicy at times but if you don't feel comfortable than just walk a section. Or you could just cut a new section out of the trees and ride that instead of anything that challenges you. That right there is the NWO of mountain biking in Edmonton. Could this be Edmonton's Mountain bike motto? "If its Hard, Cut it Out or Make a New Trail to go round Because You are a Princess and Life Shouldn't be Hard."

Yes, I really like that motto. A bit long but I think we captured the gist of the new riding theme for Edmonton in 2021.

We rod Flat Pete and saw the escape route from the dip and both remarked on how many people avoid the fun stuff. Yes, it is a bit of a challenge but it really isn't that bad. I mean come on man! Flat Pete? Really?

I can only assume new riders? Ugh.. Whatever, it shouldn't bug me but they are wrecking more forest by making these escape wussy trails instead of growing some sort of balls and riding them. Please do not take this as bragging cause we ride the dip all the time. It's fucking Flat Pete, One of the easiest trails in the valley.

A new trail. Oh damn... I forgot the name already. Purgatory's Sista. Oh man, I'm way off but that one is pretty good eh?

Oh yes, it had something to do with clams. I'll just throw a bunch of names out and see what sticks.

ClamWarts (not the best I'll admit, a bit of a take on Harry Potter)

See, I don't remember the name but these are seriously all better. The trail is quite great and as per usual a huge thank you to the contributors. Some sidehill riding starts you out where the photo opportunities are out of this world.

I will get the name when I am not so lazy, to the people who built and named it a big hearty thank you again.

We rode the creek and multi use out of Patricia Ravine and found the roads with friendly bike lane signs and followed them and crossed the Whitemud and than Quesnell. We rode up into the trees and found Farmers Daughter where more epic views and amazing singletrack awaited.

Lame roads took us home not before hearing about a proposed pedestrian bridge linking Terwillegar up nicely. Link to project here 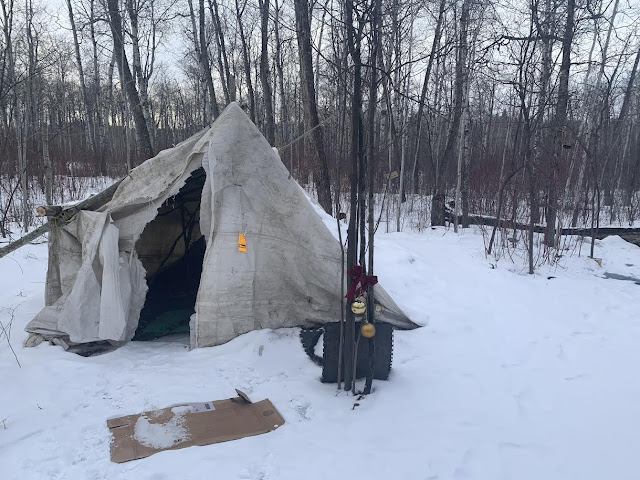 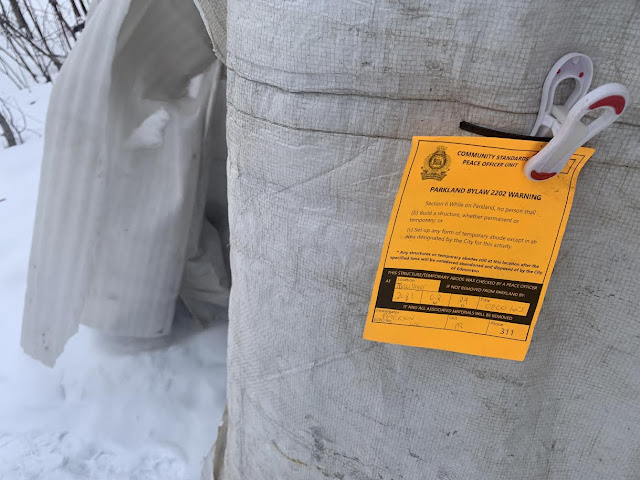 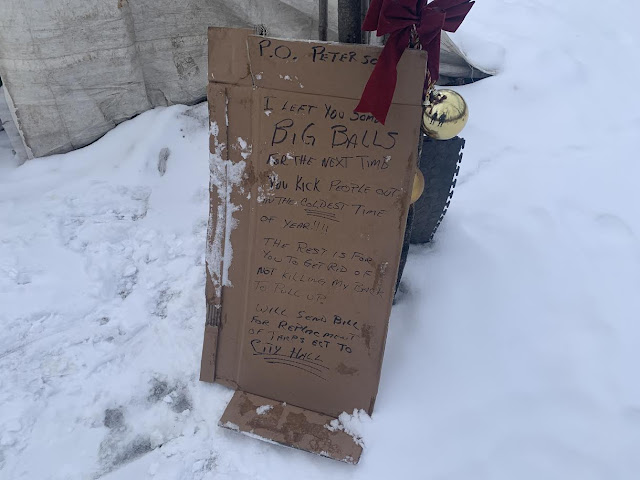 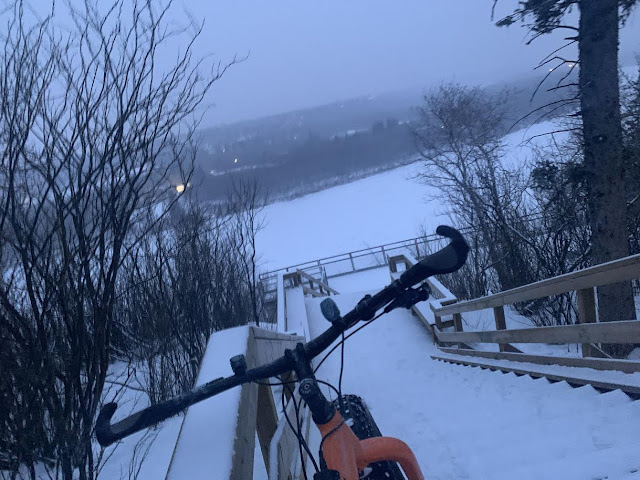 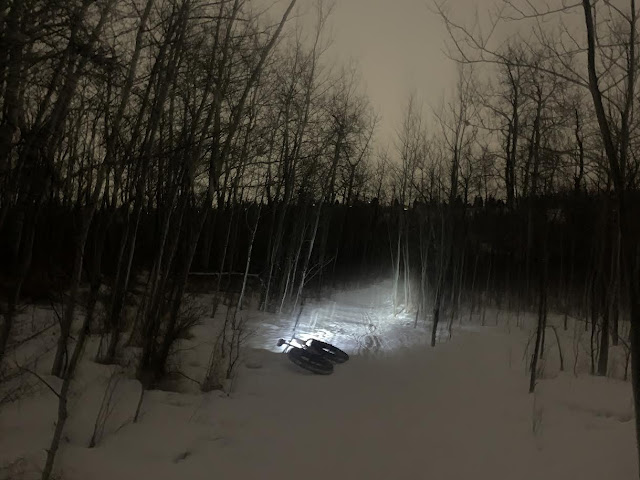 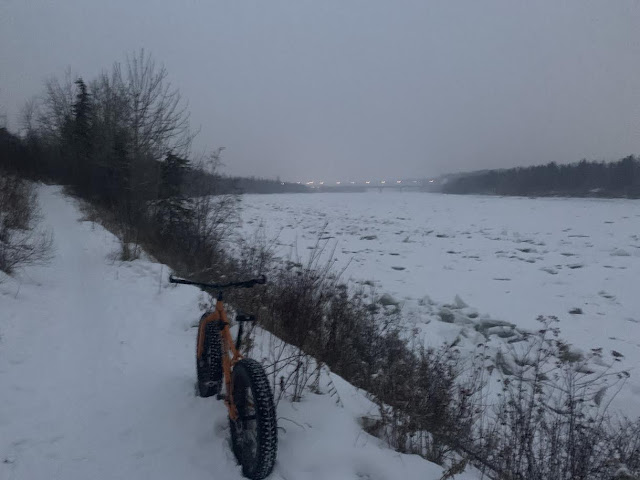 Friday has come again you hosers so we are bringing you a delectable looking craft from Collective Arts brewing who have some pretty cool artwork on their cans. Located in Canada's center of the world and also in Hamilton with an apparent location opening up in Brooklyn. Oh my God. They are so cool!

Collective Arts has been on here in the past and I distinctly remember the can. Today's can was the feature of many failed photo attempts as I tried to get the full effect of the astronaut and jelly fish but could not pull it off. Well kids. I am lying. I didn't try one bit. I just threw the can on the table and took a pic. I'm tired as hell and don't feel like taking photos ok. A cool thing about this brewery is if you are an artist you can submit your art to them and it will be featured on a can.

We poured this Blonde ale into our Seahawks tester mug in some sort of weird hope it will bring the Seahawks some good luck as some ugly trade rumours are circling around. It poured a very light looking beer that had a two and one pinky head that lasted for a short time until spreading itself out to the sides of the glass. A slight citrus smell with some sort of melon was detected.

The first sip was taken at precisely 8:21in the PM, mountain standard time. It was a nice light easy beer that certainly didn't match the current start of days off mood. A lemon is the most powerful taste you can get out of this. Like I said, it's pleasant with no bitter hops although the lemon taste can be a bit bitter on the back end.  Grapefruit peel, dried grass and honeydew seem to round this one out. Its fine, some would say a tad watered down. 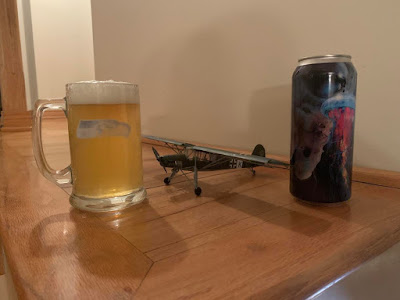 *terribly sorry for the short write up, were a bit tired over here. 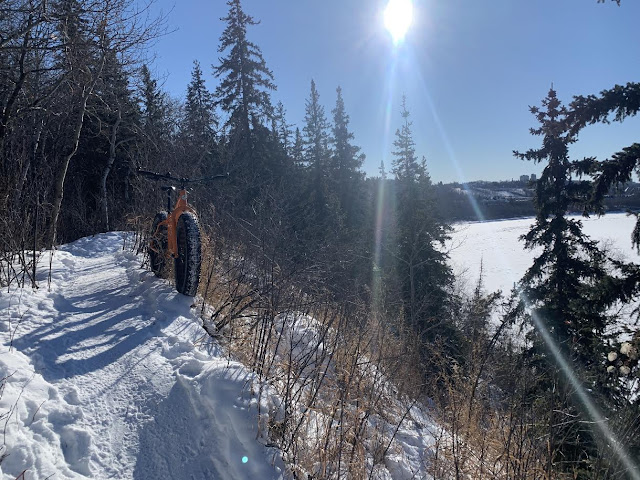 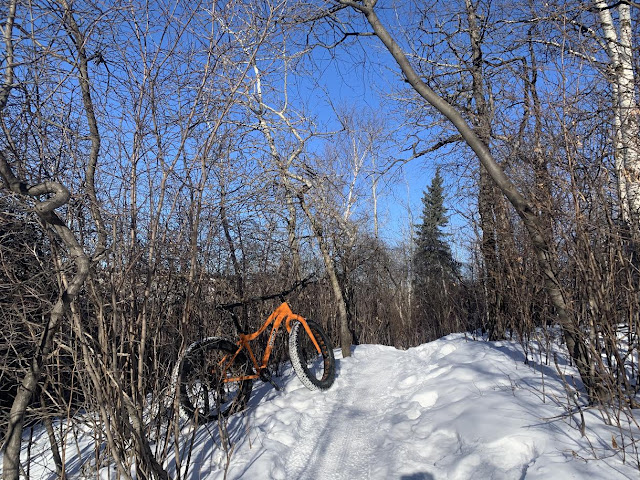 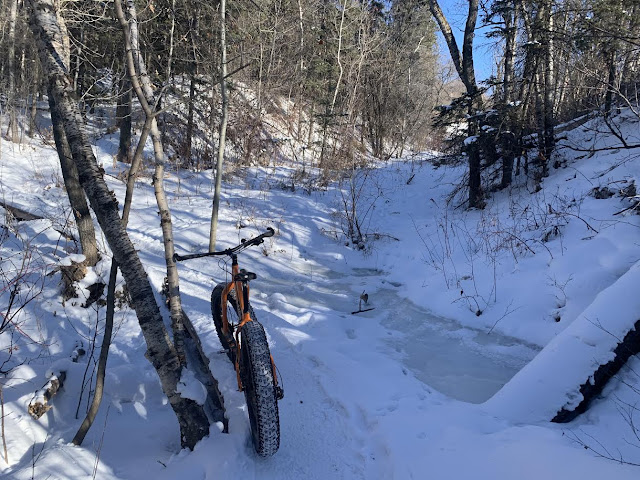