Bike Lust. Rocky Mountain Vertex TO. The return of a legend 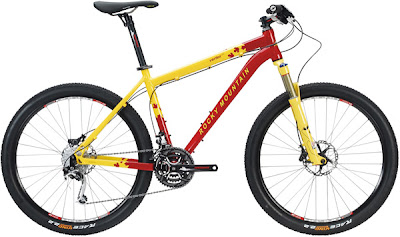 I know every car guy has that one car that car that drives them crazy with feelings of lust. In some cases extreme feelings. They would give up almost anything to have that car. The paintjob, the wheels, the way it sounds, and the way it handles.

Well boys and girls. Cars suck! Bring on the Rocky Mountain Vertex TO (which stands for "team only"). As part of Rocky`s thirtieth anniversary they brought back the Vertex in their team colours from the nineties. Nothing says Canadian like this paintjob . The red maple leafs flowing into the yellow....sigh. I don`t even think a nice titanium frame can come close to this, and as a proud Moots rider that was easy to say. I guess for me it is the whole "nostalgic"feeling when I see this bike. There is something to be said about being on one of these in the mountains. They just seem to belong there. I know I`m not the only one who feels this way about this bike, these bikes garnered lots of attention back in the day from riders and non riders, and for good reason. This bike is legendary.

Rocky Mountain is only making thirty of these bikes so they are very limited. I saw one at River Valley Cycle last week and my brain has been fixated on that beauty ever since. They even have the yellow fork that came with it in 96, no it`s not a Judy. It is Rock Shox though and it is a Sid. The same Selle Italia original flite titanium saddle that came with the bike back in the day is part of the build on this beauty.

The legendary Canadian bike company is also making a thirtieth anniversary edition of the Blizzard, they did this five years ago with the Blizzard for their twenty fifth and I almost bought one. The paint job is black flowing into white and the frame is steel....mmmmm steel.

The kicker for me not going out and buying this anniversary edition Vertex (besides my wife beating me senseless) is it`s not an Altitude. How cool would that be? An altitude TO hardtail alongside one of their new Altitude all mountain bikes would be awesome ! Plus the frame on the Altitude is steel, that right there puts it in front of the Vertex for me.

Yes, buying one for me would be nuts. I still have an original Altitude TO frame sitting in my den just waiting to be rebuilt and ridden in Jasper, and of course the river valley. The main thing to do is get it repainted which would cost lot`s of money. Then of course the rebuild. Someday young grasshopper ....Someday ...