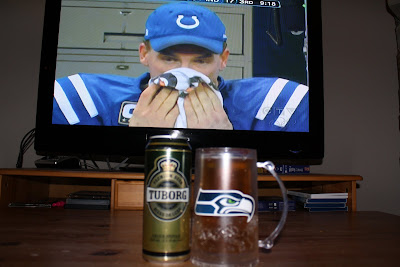 From the land of the wooden shoes comes Tuborg Gold from Copenhagen . Yet again one of those breweries that have been around longer than Andy Rooney . Doing some research so I can make this review kick some ass I checked out their website , and sadly it is pretty much party central and I found that a little lame .

I poured this bad boy into my faithful seahawks mug and watched some NFL playoff action and was surprised on how fast the head dissolved . The beer had a somewhat yellowy golden look to it (I`m starting to sound like a professional now eh ?) The first taste was a little off for me as it was a tad bitter , but I kept tasting it and it started to grow on me .

This beer is somewhat famous ..............well , you know . Other than being popular in Europe . It was featured on the Simpsons where Homer called it "the beer of Danish Kings"