Five fun but illegal things to do in Edmonton

Hey , it`s the middle of February . What else are you gonna do ? (see disclaimer below)


5. Jump off the second story into the submarine pool at wem 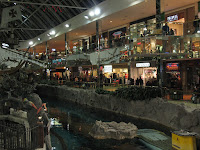 I`ve seen this one happen in person (I was not involved) . I have to admit at the time it looked like lot`s of fun . The worst that could happen would be .......Oh , maybe smashing your head on the fake rocks below or getting caught . I would imagine there would be a big fine and probably a lifetime ban from the mall (is that a bad thing?).

4. Go streaking
Have I done this ? Nooooooooo . Will i do this ? Noooooooooo . You know what though , when at an Eskimo game (where this seems to happen lot`s) it is usually quite entertaining to watch these drunk douchebags dodge security . In the end I`m usually feeling sorry for the security and police who have to handle these greasy drunk Roughrider fans when it`s all over .

Years ago there were rock climbers who would climb up Groat road bridge and I would ride up and watch them , it seemed pretty cool . Of course the city shut them down to keep them safe from lawsuits and now that bridge is empty . I`m not much of a climber but do wonder what it would be like to climb some of Edmonton's bridges . I know it happens afterhours .

O.k , o.k , I feel bad even typing this ! And that picture OOOOOH NOOOO ! This activity is primarily served by douchebags looking for money for drugs or liquor (oh the irony !). I blame the movies for this one . If you were to do this , there would be a huge adrenaline rush ! Huge ! And think of all the free beer for future beer reviews ..........Wow ! Would you get caught ? Probably . Jail time ? lawyer pending . In the end . Don`t do this ............Baaaaddd ! You should be punished for even thinking this ! Go to your room !

I`ll admit . I may or may not have but may have ridden a bike on an illegal piece of soil in my lifetime ..........Once or twice ............Or maybe a hundred times (could have been that many , can`t remember) Back in the day the city used to have lot`s of trails closed for some stupid reason and I being the young rebellious youth stomped all over them with reckless abandon on my fine Rocky Mountain bicycle . So there you go ! That`s my way of fighting the "man" .
I don`t do it anymore though ............Honest ....he he he

*****disclaimer*******
We at thelonebiker.com do not encourage , endorse , or burden any individual with thoughts that may impregneate your head , this was merely a look into the dark world (see #2) if you even think of doing any of these things (except maybe#1) we at the lonebiker will come down to your house and make you wish you were never born ...........got that ?