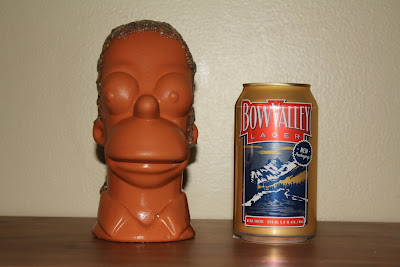 A local brew ......Well sort of . From Calgary , home of the Godless flames , Stampeders and way to many cowboys . The makers of this one were bought out by Big Rock who are still proudly brewing it . As I searched for a beer review candidate tonight this little gem caught my eye and it was all in the name . You see there is a trail in Banff named the Bow Valley Bomber which is quite boring compared to some of the other trails in that area , but I would give up my left and half my right testicle to ride that stuff right now ...........Yes , springtime allergy season has been a killer this year .

The pour ......... Yes I did the pro thing and poured this one into a glass and it poured just fine , in the end there was a two finger head that dissolved quickly . The color was clear much like what you would get with Budweiser . First sips were good and so were the last . I would recommend this to you if you are out and about in a beer store looking for something that ales you .........Ha Ha Ha