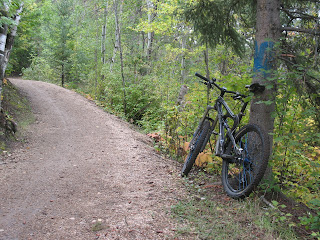 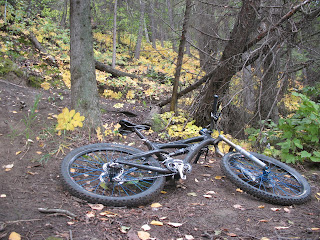 Played hookey from work for a few days for my second mini Summer holiday (it`s still summer right ?) I took the "couch bike " out expecting to ride some gnarly stuff and realized how wet it really was down there . Holy shit ! Nothing good was runnable , the singletrack was slicker than a jar of KY .

So I stuck to the gravel and paved trails and ended up riding up to my old neighbourhood in the west end . Talk about a trip down memory lane . I had driven there a couple times over the years but being on a bike the memories were alot more vivid . Which proves once more how much better being on a bike is than riding in a stupid car .

I punished my nobbies on roads for about 15 kilometers exploring old schools and friends houses and wondered where and what everybody is doing now . I retraced our old walking route to West Edmonton Mall , got to the mall and had a strange desire to go for a walk inside (it`s been a while , maybe one day again soon) . After the trip to the mall I had a strong desire to head back into the quiet cool wet valley and dropped back in the way I came out . Was it ever quiet down there today !