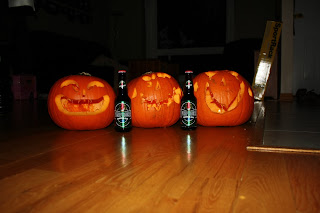 In 1999 Shaun Fraser and his lovely wife Lilia opened up a brewpub in Moncton , New Brunswick and within a few years they had to expand because business was quite simply put ........"Stellar" . They won brewery of the year and numerous other awards since theit inception in 99 , and to think the world was supposed to end that year . Talk is in the works of franchising and the fine New Brunswick couple have plans for world domination by the year 2012 , ya know the other year the world is supposed to end  (those jerk off mayans).

The beer of choice from Pumphouse was "Scotch ale" . A regular in their lineup , and you can luckily buy it in certain outlets in Alberta . Again . Bottled beer so I didn`t pour , the smell had a strong malty flavour to it that made me think this beer might not be too bad .......The first taste was real good , and so were the rest . It has caramel and some sort of smoky wood flavour mixed with hops that makes the taste buds lie back and dream of magical space unicorns in graceful flight on their way home to planet Nexis for horn recoloring ..........Yes , it is that good . Go out and buy some right now . 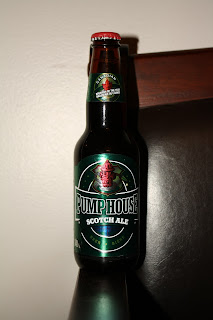