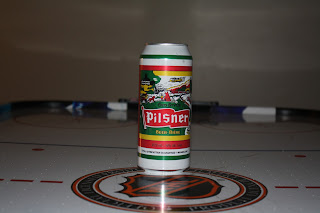 Honouring the 306 in this weeks edition as their football team will go to Calgary and play the Godless Stampeders for a trip to the Grey Cup . This stuff is drank like water in the great province of Saskatchewan . Many , many young men and women lost their alcohol virginity to this stuff and still love it . Now did I mention the Roughriders yet ! Yes I did .  Pilsner beer and Saskatchewan Roughrider fans go together like my Ibis Mojo and a good rock/root garden (all you carbon naysayers beat it !). The irony is Pilsner was started in Lethbridge Alberta , which is close to Calgary ........home of the Stampeders . The name on the bottle up until 1926 was "Alberta Pride" which would make a true Saskatchewan homie rage with anger . Irony . I love it ! The company is now owned by Molson and is brewed in Vancouver and Edmonton . Pilsner is a big sponsor of the Roughrider football team so yes I understand the love .

The cans were bought locally and if you live pretty much anywhere in western Canada this would be pretty easy to get . I poured it into my trusty Seahawk mug and waited a full four minutes for the three fingered head to dissolve . (actually , no I didn`t time it , it did take a full song though) This stuff does dissolve slo.......Oh wait ! Big time WTF moment going on right here . My Girl dog is trying to hump my boy dog . If my wife sees this I don`t know what may happen .......That is one very confused dog . I yelled "MARLEY , YOUR A GIRL" to no avail . Anyways , sorry . I hate interruptions , stupid gender confused dogs may have ruined this beer review .

To finish it off the taste is o.k . I had this before and it never got me too excited . In fact comparing this beer to all the greats I had on here doing these beer reviews I`d say it pretty much sucks . The taste is nothing , it tastes like beer but watered down . There is nothing in this that jumps out at you like any good beer would do . The only good thing this would be for is getting sloshed at a Roughrider game .....I think I`ll pass on that one .