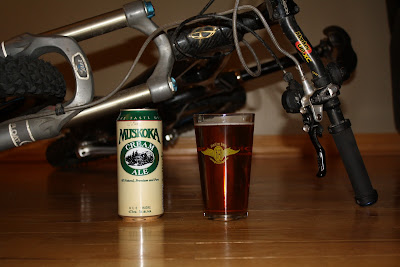 From one of the cities worst selectable beer coolers in cold , snowy, and blizzardy Millwoods (as of tonight) we bring you Muskoka from .....Wait a minute ....their site is taking forever to load . Come on guys , do you want to sell beer or not ? Oh here we go ! It says on the side of the can . Bracebridge , Ontario . Home of I have no idea , this is the first time I heard of that place . Give me a break , Ontario is pretty big o.k . According to the internet emporium aka "google" (the map division) This brewery is in a cute little town next to lake Muskoka , hence the name of the beer . The brewery and town are located a few hours north out of Toronto .

The brewers founders Gary McMullen and Kirk Evans bring you their Cream ale . Claimed by the website (it`s working now) as their signature beer . The pour got to show off it`s caramel orange colour, and showed not much of a head that quickly dissipated . The smell was that of a golden coloured Autumn forest in the morning when the dew was in all it`s glorious morning extravagance . Actually no . It just smelled like beer . I did get a sense of caramel though which is probably why I said it  had a caramel colour . Strange...

First sip wasn`t a winner , and then I had a few more and couldn`t quite put my finger on it . A slight bitter aftertaste came after . The butterscotch malt was the only thing saving it as it did have a sour taste to it . This beer would be great sitting around a lake in Ontario cottage country swapping stories on the plight of the Maple Leafs . For that reason I know I will never have one of these again , and I guess I`m o.k with that .