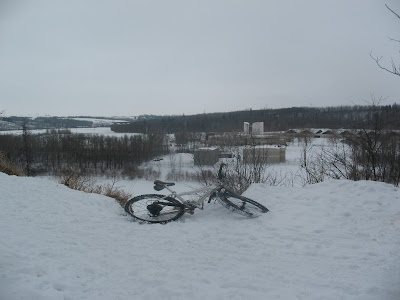 On a Thursday morning ride in the infamous dog park when things should be quite a bit slower, I was chased by three separate dogs from three different people. On one occasion I was bitten repeatedly on my foot by somebody`s small piece of shit dog. There was no damage done as my winter shoes have good armour. As much as had I wanted to chew out the girl walking the dogs (she had three) I was just trying to be as friendly as I could, and she already felt like an incredible douche as I stopped my bike and tried to coax (well kick) the dog off. She apologized repeatedly and told me it wasn`t hers, she was dog sitting. "How come you don`t have that thing on a leash?" I asked. She had no answer. As I rolled my eyes she finally convinced the dog to stop trying to eat me foot by giving it a treat. "oh that`s great. Reward him for attacking people!" She looked down, and said nothing. I understand she was panicking and would do anything to get the dog away from me. I eventually rolled away as she held the dog and apologized a few times more.
After that incident I was chased by two more dogs. Why is it always the little dogs? Do they feel inferior? The owners are the obvious problem, they should not bring their dogs down to a park when they are not trained....simple. Yet, more and more of these people are bringing their untrained animals to an off leash park. It`s only a matter of time before somebody gets hurt, hopefully not a kid. I find Terwilliger getting worse and worse over the years. My beloved MillCreek is getting bad too. I rarely ride the North trails anymore cause of all the dog activity.
As dog owners ourselves, we know our dogs won`t behave in a place like that quite yet. Therefore we don`t bring them down there, and yes, all the riding in the River Valley over the years has made me alot more aware of this problem. I wished more people would use their heads before heading out that`s all...
Other then all the fun with everybodies puppies. The ride was o.k. The snowfall from yesterday had made the trails quite challenging at times. An over the handlebars wipeout into white fluffy snow just about ended my stint as a Mountain biker..... That shit was messed up folks!
at March 24, 2011