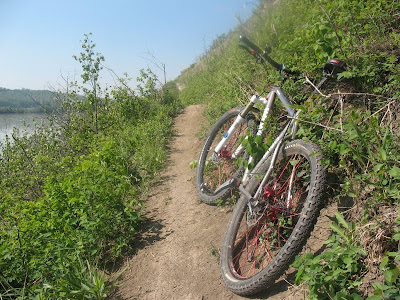 I left the house earlier than usual as I wanted to hit Terwilliger park knowing it would be jam packed by noon. The drive down into the parking lot revealed I made a bad decision. A corporate challenge orienteering event was taking place and vehicles spilled out into the field. There was a long lineup for the port a potty and people were blocking the road. "What the hell am I doing?" I kept saying under my breath. Large crowds and me don`t get along, especially out on the trails. Which is probably a good reason why nobody would ever see me on a large group ride. Hence "the lone biker."

I got on my bike and disappeared into the hills where I knew there would`t be too many people. The main reason for hitting Terwilliger was wanting to ride Breathless trail again. Once I was across the Henday and on the singletrack I was completely alone... Or so I thought, halfway through the trail there were strange noises in the bush. I figured it must have been a deer or probably an angry grizzly bear. No big deal really.
My second ride on Breathless trail reminded me why it was named "breathless," this one will kick your ass and probably give you a couple of jabs when your down. Switchbacks from hell coupled with short steep descents had kept me wondering if I could stay in control of my little hardtail. My only complaint was the amount of dead fall that laid across the trail forcing me to get off and hop across. There are already a few hike a bike sections that are almost mandatory to get off and hike (oh, I could be such a bitch sometimes!) The exposed side hill riding is worth the trip out, and if you could ride this end to end on a singlespeed without getting off than you sir are my hero!