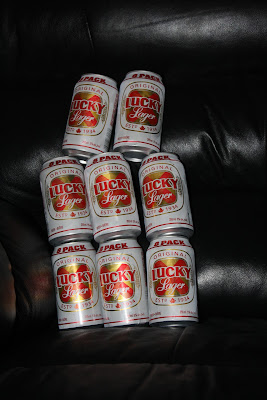 Well Beer Friday finally returned on an actual Friday and I finally have a bike ride under my belt. I sort of feel normal right now other then spilling some house freshener during the picture shoot all over the ground rendering me a tad "high." The good news is the weekend is free! Which means only one thing.
I could drink all eight of these plus that bottle of Dr Mcguillicuddys's mentholmint schnapps that I've been hiding in my bike drawer in the basement...

Lucky Lager, a proud Canadian discount beer that has been brewed since 1934. Now owned by Labatt brewing company...A Canadian mega-giant. what's best about this beer is it's cheap, well cheap for Canadians. When you are spending just over ten dollars for an 8 pack you are truly getting a good deal! This is one of the beers of choice of College kids and cheap hockey fans all across this frozen white tundra.

The open was unceremonic (I'm really hoping that is a word, but that beer opening was just downright dull) I poured and it showed its giant head and I bowed down in awe... This head was huge! I blame bad pouring skills but that was one impressive head on that son-of-a-bitch! The first sip was a letdown; and I say that only because the pour was such a monumental moment. After a few more sips I kept getting the "watered down" sense. This was not cool after a week at the shop! I tried one from the can and didn't get that all out beer "taste" that one craves after a long drawn out work week. I only remembered the price and smiled.... a tad. 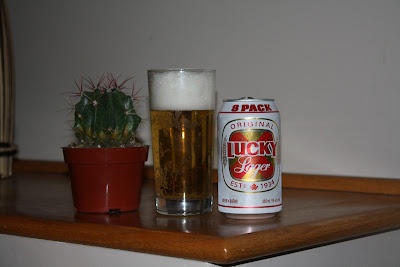