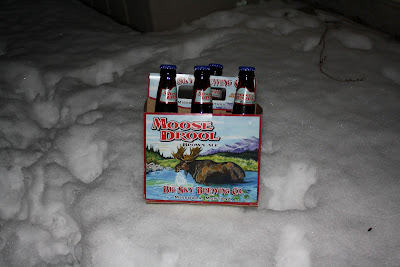 As promised to no one, this weeks beer review comes to you on a Sunday night rather then Friday. Why? Cause I don't have to work tomorrow, and is there anything better than beer on a Sunday night when you don't work the next day other than beer, football, post ride pain and a Monday off? Oh baby I just had shudders right there.

Big Sky comes from you guessed it... Montana. This is a beer which will give you lots of trouble trying to find in the Edmonton region. Other than shopping at Sherbrooke I'd say you are pretty much shit out of luck. Mind you, seeing where more than half the readers of this blog come from it looks like most of you are shit out of luck on finding alot of these beers anyways. This six pack.... Well four pack comes from a dear friend who just returned from the great state of Montana. This brewery opened it's doors in 1995 in Missoula and is fairly prominent in the great State and has sales in most western States. Moose  Drool is their flagship beer and the company was sued in 2000 by Moosehead brewery in Canada for using the word "Moose" in the name. I'm guessing Moosehead was just following Metallica's act of suing everything that sounded similar to their name.

The pour was tall dark and handsome, much like a certain blogger I know (wink wink). If you remember some earlier reviews, I find those dark beers a little intimidating. Whole black hops are used in the brewing process and it is very evident in it's look. Luckily though, Moose Drool is only just over 4% therefore I didn't have to hide in the crawl space from yet another beer. I got a small one fingered head that wasted no time hanging out and was gone, sadly reminding me of when I tried hanging around girls when I was single. The first sip was what I expected from a craft beer maker, loads of malts assault your senses. Lots of flavour comes at you from drinking Moose Drool. Chocolate, nuts  and earthy hops are evident in this one making me wish I had more than four. And have I mentioned the name yet? "Moose Drool" that is one kickass name for a craft beer... 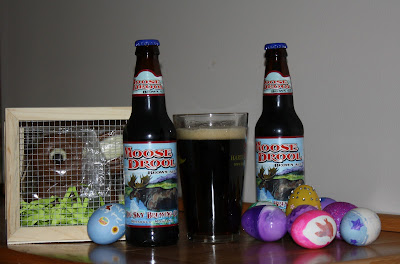