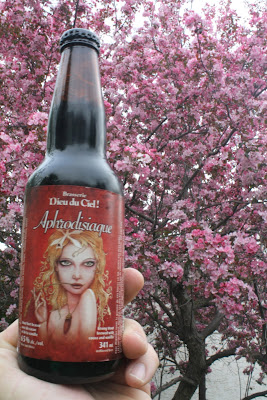 Thank God for "copy and paste" or I would have never have gotten the title of this beer on the the title block of this posting. I love me some exotic beers, and this doesn't any more exotic then this.... So you would think? This is a Canadian beer from Montreal Quebec. Brasserie dieu du Ciel have more beer then China has soldiers in their lineup. This boutique brewery has a pub to make you feel right at home. 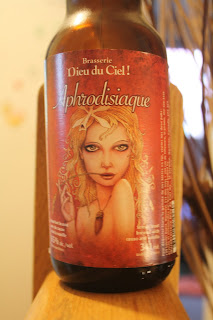 Aphrodisiaque won the prize for best distinction in 2003 in the Popular Beer Contest for "best ale," and that started a runaway train of beer contest winnings all the way till 2008.

What's best about  Aphrodisiaque is the cover of the bottle. A very cute and topless french girl adorn the label of this dark, mean, angry beer with an alcohol content of 6.5%. Brothers and sisters, this beer may seem cute on the outside but she packs a powerful kick to the groin to the unsuspecting drinker. Honestly though, most people who pick this kind of beer up have a head on their soldiers, unless they think it's an actual aphrodisiac and hope to get a little something out of it by feeding it to their unsuspecting wife.
Truth be told. I tried feeding my wife this, and nothing happened...


This one poured cold and dark. Much like that of a Mill Creek dog walkers heart. The lacing on the glass was pretty cool and in a strange way reminded me of the Northern Lights. Roasted malts was the most prominent smell I got out of this sexy French Canadian brew. The taste of this gave us everything we all love about craft beers. No taste of alcohol for a high content beer is a huge plus! Malts, chocolate, and vanilla give your mouth "craft beer orgasms" which never seem to end until sadly the last of the savored bottle is gone. The taste of this one easily explained the name on the sexy bottle.. 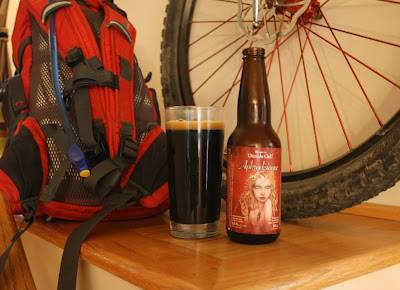