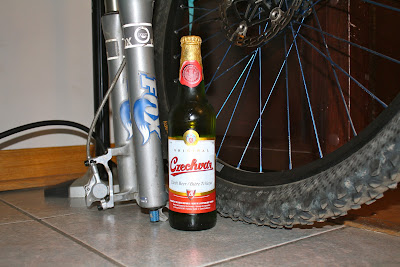 Many, Many moons ago in Bohemia, Czechoslovakia another great beer was born. To be exact. April 15, 1895. Bohemia. A city of small brewers which over time disappeared which gave way to Czechvar to lead the way.

Being told years ago by a liquor store owner that this stuff was the Czechoslovakian equivalent to Budweiser was something that stuck in my head. Doing the Google searches to find out more about this one there were people claiming that it was the same. Some more digging showed that it was just a naming issue. Czechvar was brewed in an area that helped name Budweiser beers. Or so I think. Maybe it's the name of the brewery (Budweiser?) Do I really want to keep digging and bore myself trying to get this information out? Hell no! This is why the reviews on here are "stellar" that being said. "Stellar" to lonebiker standards means "shitty" got that?

Now that I've bored and lost 90% of the readers and gained  56% of people who like looking at pictures (there are three on here you know!) I poured this one and the beautiful golden coloured beer with a small head that screamed "DRINK ME BITCH!" Thus I drank, and drank it like a bitch as I was commanded by such a demanding beer. For a pilsner it was pretty good , craft beer Godlieness had no place near this one but I was somewhat happy. Some hops stayed around and teased my mouth. In the end, this one will do. Certainly a better beer than Budweiser (of the Americas) but not something I would sit and tell my dogs all about after a taste. 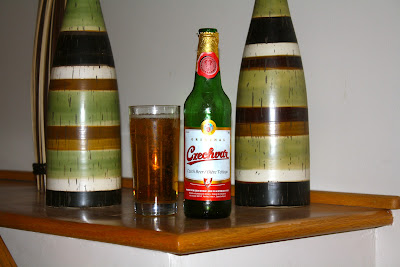