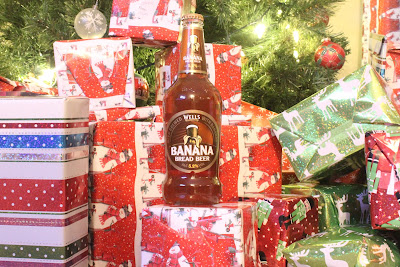 Coming to you on this, the shortest day of the year, also the first day of Winter! After today, slowly the days will be getting longer and in 89 days we have Spring! Hopefully that brings the start of some decent riding, although up here we tend to have to wait a little longer.

Wells & Young's brewery who are together thanks to a merger of Charles Wells Ltd and Young's Brewery. Headquartered in Bedford, United Kingdom. The two breweries became one in 2006 and seem to be quite happy of their success and Independence from the big breweries (that's right, piss off Heineken!)

The Banana Bread Beer is a definite specialty and I was happy to read on the website was a "subtle addition of banana flavor." I am one of those who believe banana flavouring should not be added in ANYTHING thus, I was a little bit apprehensive when it was time to do this review. A "little bit" is an understatement, I fought hard not to review this one but lost.

The pour came with the scent of banana and I was again quite apprehensive about the first taste. The beer, despite it's banana flavouring shortcomings stood tall and proud in my tester glass. A two fingered head completed the look of one who was bold and strong. The first taste was quite pleasant, it was smooth and had traces of vanilla and caramel with a back drop of banana that really doesn't offend the "anti banana taste buds" too badly.

In the end, this isn't a beer you would get for a bender. One in front of the fire while sitting around waiting for Santa would suffice. I would move on to something else afterwards. That is unless, you go ape shit over banana flavoured food. I would suggest having a few more in your arsenal if that is your calling. 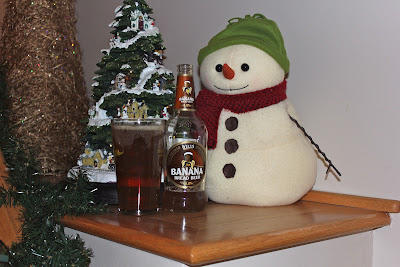