A rough week has passed by and Friday is upon us again. A week that saw two bike rides forcefully get swept away in place of other activities. Friday nights were made for sitting back and tipping a few and tonight seems more deserving than the rest.

Phillips brewery in Victoria Canada was formed in 2001. Matt Phillips started this brewery on an apparent line of credit which gets my vote for a guy being awesome. People who go out and take chances like that are bold, plain and simple. Being based in Victoria British Columbia is a pretty sweet perk on owning a brewery. Easily one of Canada's Gems.

Phillips Longboat Chocolate porter is one of many beers in their lineup. Chocolate beers are something I'm starting to see more and more all thanks to the current craft beer craze that seems to be gaining more and more momentum. The pour truly was impressive, why, I even ran up and showed my wife after. A very rich looking dark beer with a dark golden head that looked like it should have been Kinged. I didn't want to drink this because it looked too awesome. As expected the first sip was incredible as well  and I fell onto the floor and had multiple beer flavoured tasting orgasms. Chocolate was obviously something that hit you once it was in your mouth. It was nicely carbonated and the only bad thing would probably be mouth feel. It felt light. For such a dark beer it was a tad off putting. Nevertheless, this was a great beer, it reminded me of my Saturday morning cafe mocha I get from Starbucks in a way but was better, much much better. Probably cause it was beer. 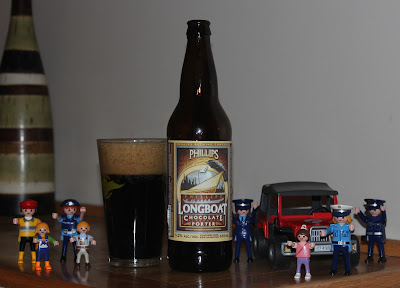