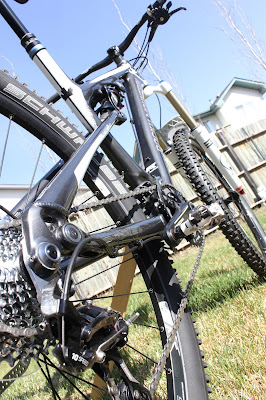 Earlier I had posted a mid season ride report with the new bike with the promise of a second part coming soon. I had gushed on the awesomeness of hardtails and it seemed like I was wasn't giving the Rocky a chance. Well it never had a chance to show itself. A good chunk of the riding it gave was done in dreary Edmonton wet rainy shitty conditions. Which makes one wonder if having a bike like this here is worth it when you can never truly experience the true joy it's supposed to bring. That being said I'm a tad bitter about the state of this 2013 Summer. If 13 is truly an unlucky number I hope it passes by quickly and the great 1---4  makes its graceful appearance.

The bike report although incredibly early is frustrating to write about. All attributed to my current non riding state. Another rainy Summer is being put in the books and I don't know if I would have truly experienced the full awesomeness of this bike. The bigger wheels were noticeable on the sections I got to ride where bigger wheels were supposed to shine. That was noticeable on the first few rides. The large wheels and smoothlink travel combined to tame the roots into unnoticeable nothingness. The wide 29" bars took a bit to get used to but on the trail handling the technical goodies I feel much more stable than I do on my 26"bar on the hardtail. Easily one of the biggest surprises for me, as when I got the Altitude home I vowed the bars would be the first to go. One section of single track opened my eyes and I became a believer. The one problem? The tight trees in Fort Saskatchewan and various areas in the Edmonton river valley which invokes instantaneous asshole puckering navigating through the tight trunks. With the great control I now have that is a minor inconvenience.


The two gripes on this bike would easily be the brakes and the matter of the noise they make. The Avid Elixir 50 xm's provide great stopping power but having to listen to the squeak while coasting down wide open trails was incredibly annoying. The other gripe would be the saddle. Made by Rocky Mountain it was quite uncomfortable once you hit the 25km plus range on a ride. That is a completely personal thing and I know varies from rider to rider. The sad part is the saddle might be ok, I just didn't have the proper time to break it in.

So come later in August or very early September the pedals may hopefully be spinning again, the angel on my shoulder keeps telling me not to ride till your 100% while the devil is telling me to skip work tomorrow and go to Hinton. Meanwhile my wife keeps calling me a giant pussy.