Well that was sure a shitty week, I'm glad it's over as I only have about four or five more just like it ahead of me. Broken ankles are alot more work than I first thought. The mere idea of having to hop around on crutches limiting you to carry pretty much nothing, unless you have cargo pants with that all important side pocket of course. Well with those brothers and sisters, you are a true broken ankle transporting machine! Of course with breaking ones bones there is the invertible pain factor that comes with it. There has been a non stop throbbing for the last five hours emanating from down below, pulsating with what seems like every second beat of my heart. That is why I am excited to have some beer. It might just numb that pain.

That is why we give you Eviltwin brewing based out of Brooklyn, New York! That's right. New York city baby! Brooklyn is well known for it's high hipster population therefore this one is appropriately named "Sonderho Hipster ale" named after the hippest neighbourhood in Stockholm Sweden.  With an alcohol content of 5.5% it packs a little harder punch than most stock beers but won't knock you on your ass.

The pour and first experience of flavour which came up through my nostrils was a fruity sour angry smelling beer. The pour showed us that murky can I say again? Unhealthy urine colour? I know I used this a couple back but it just seems to fit. With the smell and the colour I was a little bit reluctant to try it, a thick head the colour of an old redheads unkept hair that went to grey would not seem to go away. Not even after a few sips. A heavy lacing left it's mark on the sides as this one was downed as well. The taste was quite wild and sour and I would caution only seasoned beer drinkers to try this. A bit of fruit added to the taste and looking at the bottle and seeing it was wine barrel aged it all made complete sense. Try this one if you are an adventurous looking lass. 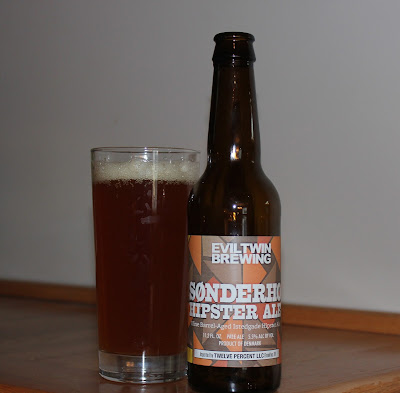