Have Fatbikes Become the New Fixies? 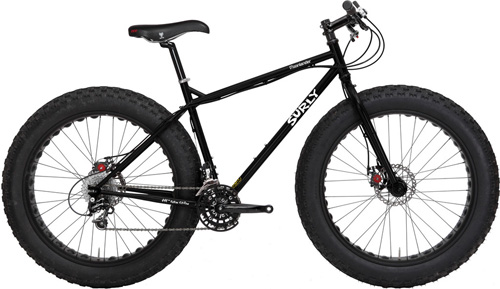 Last Winter biking season I was shocked by the amount of fat bikes navigating the trails in the river valley. It is clear that these behemoths have taken off in popularity and now with word that Trek and Specialized bringing out new models. That is a sign that they won't be going away anytime soon. Could this be a sign of the apocalypse? Well I don't think something bicycle related could be a sign of the end. You can now wipe the sweat off your brow. I didn't mean to scare you.

My only question I ask about these with regards to owning one is why? Now please don't send me angry letters or worse, hunt me down and break my other ankle. The term "don't knock it till you try it" applies here and I never rode one. So please leave me and my ankles alone! From my experience on seeing these in the valley I can say they are incredibly slow. In fact they are slower than me! Gasp! How is that even possible?

It is obvious these bikes are not about speed and they are about one thing. Dominating! Yes they apparently will go anywhere you point it, and if you ever spent a Winter in the Edmonton river valley that will come in very handy. Yet I wonder what the limits are? With insane amounts of snow dumps like we have seen in the last two Winters even these bikes would be hindered. Yet with four inch wide tires running at 8-15 psi you just might be able to conquer the deep heavy snow but I do have my strong doubts on that. The dumps of two inch to four inch we get though is where the fat bikes would rule the roost, I was able to get through on my Stumpjumper before it was packed down but it was very tough slugging. The wide tires on a fat bike at an incredibly low psi would help one float over the snow like some sort of crazed ninja floating over an evil opponent in the midst of a roundhouse kick. Yes, imagine all the stunned folks in the river valley seeing you riding one of these! That right there is what makes me wonder if people get these for the novelty of owning one. It is pretty much guaranteed that you will be gawked at riding one and answering lots of questions on a busy warm Winter day. To some that attention is a reward and for myself, a strange wonderment of these bikes becoming the new fixies.

A search on Vimeo and Youtube showed lots of videos of guys and gals riding their fatbikes on hard packed snow making me wonder just why they are needed, thinking back to last season when most of my riding was on hard packed snow and my bike did just fine. Maybe I'm just the jealous type? Jealous of these fine folks all strutting around in the valley on fatbikes while I look on forlorn while riding my old school twenty six inch wheeled hardtail! No, that can't be. I know where my wife is every second of every day by texting and calling her and I'm quite comfortable she doesn't ever talk to any other guy. But what does jealousy have to do with bikes? Nothing.

So with more fat bikes coming on the horizon it will be interesting to see how many people stick with them. I am sure the Chai Tea Latte drinking, Terwillegar park treading, BMW couples who buy them will forget about them after a season that brings no attention to them. The one who appreciates bikes who buys one will ride that fat son of a bitch into eternity. Maybe that rider will be me? Who knows, I did have a serious look about five years ago at the King of all fat bikes, the Surly Pugsly. Was the novelty of owning one weighing in on my psyche? I'll admit, it was. Daydreams of riding my fat bike in front of thousands of adoring onlookers in the river valley weighed heavily on my mind. Maybe the mayor would want me to lead a parade on my fatbike! Oh the possibilities!