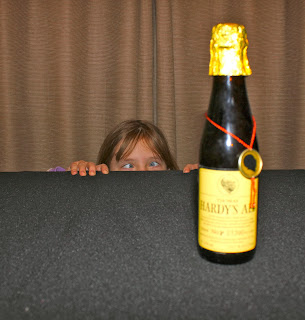 Terribly sorry about completely skipping out on the reviews last week. My, my, I feel like such an ass! To make it up for you I will not go riding this weekend and I will have this beer review done in a prompt Friday night manner. I understand your frustration when no beers are posted with no explanation. A bit more frustrating than clicking on a 30 second Youtube video and having to watch the full 18 second commercial with no chance of a 5 second click out to freedom (who watches the full commercial when they have that chance anyways?) Why no bike rides you ask? Cause Christmas is starting to get in the way! Here's hoping for a Sunday evening ride... Fingers crossed.

Today's beer is one of those bad-ass-son-of-a-bitches. 11.7%, yes that is not a typo. That might explain the small 250ml incredibly classy bottle. I have had classy bottles on here before but none of them had it's own necklace. I was in awe of the class this one possesses. This is a barley wine produced once a year in the Clyst. St. Lawrence, in England. First produced in nineteen sixty eight, obviously now there is a reason why this one is so classy.

The pour went well and no head evolved as this is not that type of beer that wants to show off and let the first douchebag laced with Axe body spray take her home. This beer deserves to be treated right and I even felt ashamed after the long photo shoot which produced nothing that would treat this classy lady right. A dark orange coloured ale showed its might and I was awash with giddiness. The first sip was a showing of what happens when people do things right. For an incredibly high alcohol content the taste was soothing and not shocking. It's medicinal without tasting like medicine. This is a dark ale with a dark fruity alcohol kick that should be enjoyed over the Christmas holidays after a good bike ride in the snow. Giddy up! 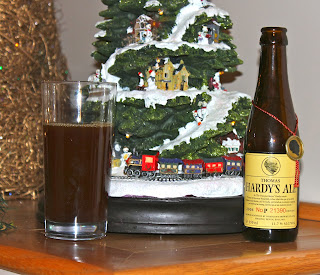