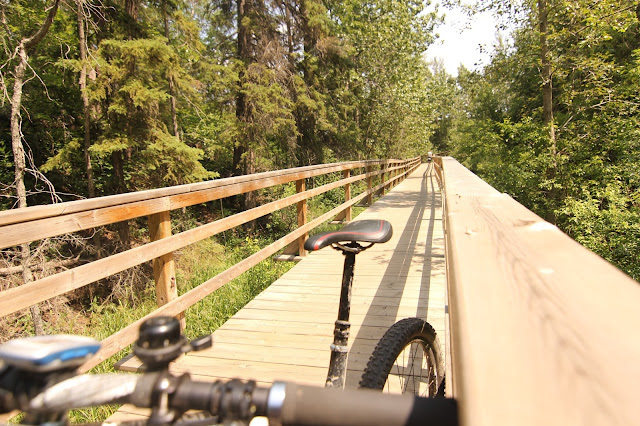 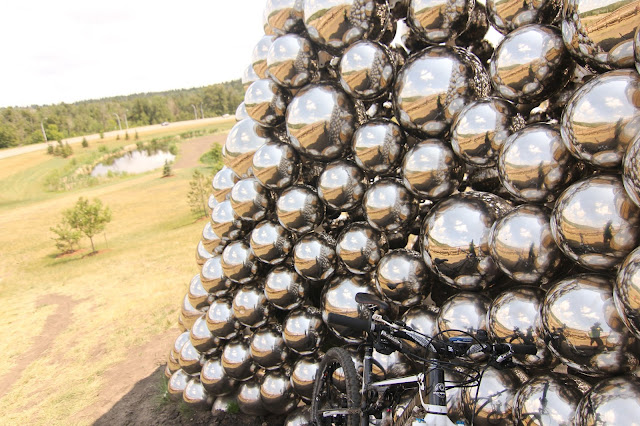 The Summer solstice ride historically has always been all about hype but once it happens it usually fizzles to nothing. At least that is my history with riding on the longest day of the year. It all started on an epic day in Jasper National Park. I rode to the top of Signal mountain, rode down and then did Old Fort Point to Valley of the Five Lakes. That was a pretty good day and I still think of it now as tears of pride run down my cheeks.

Today's solstice ride started with a giant fizzle as I arrived at the trailhead without riding shoes. So a return trip to Beaumont was had from the Science Park. Thoughts of packing the ride in all together ran through my frustrated head.

I punched the evil thoughts aside and dropped into Pogey trail and topped the start of the ride off with a trip through Cambodia. I stayed on the South side through to the Talus Dome. Wet and slippery rooty trails had a significantly large ass puckering factor.

The river was crossed after worshipping the Talus Dome Gods where Mackinnon was eventually ridden making it the last highlight of the day. I got a taste of the new version of Back Breaker on the Rocky Mountain. A bike built for bad ass trails. With a brand new rear wheel we rode Back Breaker together and were a bit upset.

Back Breaker was once the mind numbing orgasm which topped off your sex after riding all the roots like a bike God. Now I can only compare it to premature ejaculation. I sat at the end of the trail and wondered aloud "is that it?"

After riding Mackinnon my body was done. Was it a part of being disappointed at the now boring Wal Mart bike finish? Maybe. I had absolutely nothing for the ride home and limped back on paved and residential. To think I almost pushed it to Terwillegar park for an end to end valley run. I probably would not have made it. Baby steps. I just got home.