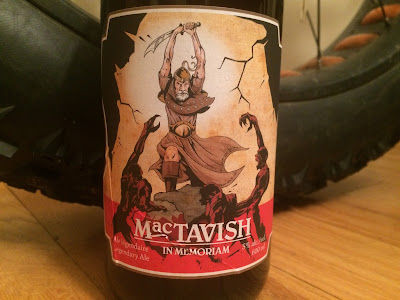 Another ride-less week has passed. A week full of work and nights spent at home in a regular boring routine. Thankfully I haven't resorted to the couch yet watching re runs of the jersey shore while eating bon bons and drinking a 2 litre Pepsi Cola.

Friends. I'm afraid those day's aren't too far off. In all fairness my recent back injury has kept me off the bike. This week the back has been good but I'm trying to play the smart one and rest for a bit more. Meaning this weekend will be spent sans bikes.

Le Trou Du Diable who are located in Shawinigan, Quebec, Canada is very French. So French Canadian in fact that their website is all French. With no English translator other than Google. I can see that these guys are hard to the core French Canadians, and that right there is pretty great. This is why Canada is awesome. We have a completely different culture right in the middle of the country via one provinces border.

The pour had a bit of a hiccup as the latest beer pour-er. Let's just call her Giselle had slipped up a bit and let a massive head form on this weeks beer tester. The test was halted at once by yours truly and Giselle was shown the door and was told to never ever show her face in or around the lonebiker beer tester lab for the rest of her now appalling life. As the rest of the beer was poured things went back to normal and we were excited about the first taste.

When holding the glass up to the nose the senses take up quite the strong presence of hops, citrus, with pine. Just the smell alone of this one had me quite intrigued. I was ready for this and suddenly felt bad about firing Giselle. No wait. The bitch fucked up the pour. She's done.

The taste was just what the nose had given me. A hoppy citrusy pale ale that had me wincing with a feverish serial killer disguise as I downed each sip. As each sip entered my mouth I collapsed, eyes rolled back into head and got up and sang my favourite Quebec song 'Ballad De Louis Riel.' It was very strange. I mean every time I took a sip.

This one was yet another winner. If you want a citrusy hoppy winner of a beer that leaves a sexy lingerie like lacing on the glass as it goes down than look no further. 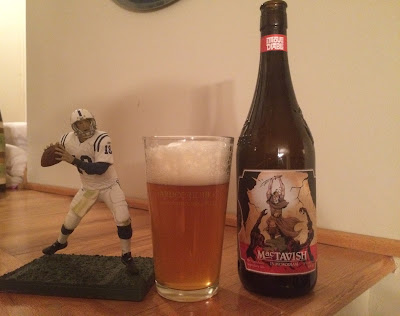