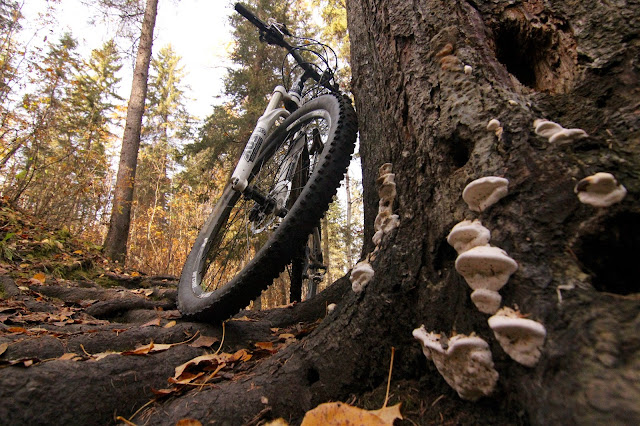 A cold and hard one today that had me struggling out of the gate from Kinseman park. The main intent was to see the Terwillegar park footbridge one last time as it is in it's final stage of construction and is set to open within a week or two. The mere thought of the riding possibilities this will open up is really quite mind blowing.

A shame it is opening so late in the year and with the first crossing potentially being on a fatbike in the snow is a bit upsetting but thats just me being a giant bitch.

Nevertheless. The first crossing will be epic.

Today wasn't so epic. At least in how I felt. With just about thirty km hit though no complaints can be had. From Kinseman I went West through Hawerlak, crossed into Laurier where I was immediately chased by a shitty dog and then saw three very stereotypical white women wearing yoga pants, Uggs, and holding a Starbucks coffee undoubtedly talking about their cross fit routines.

Eventually I climbed up and hit Patricia Ravine/ Wolf Willow. Call it what you want. I'm seriously surprised this area doesn't have a dumb trail name yet with all the clubs rolling through. I felt skittish on the sketchy stuff and even walked some sections with my tail tucked at the fear of a bad crash. I blamed my lack of riding for that and vowed to get better.

Eventually I was in Oliskew and took in the new bridge. "It seems dippy" I thought. It does look like it rises and drops as you cross but from my shitty vantage point it was hard to tell.

The plan was to ride Selkirk the opposite way but I knew I had nothing in the tank and started to limp back home.