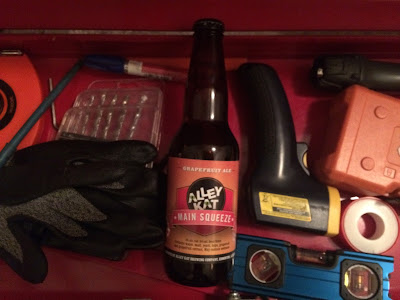 Greetings on this beer Friday written a day before I leave for the mighty north. Could this review be published in my third straight week? Or am I on the verge of coming back with dreams of bikes running through my head? Time will only tell when it happens but rest assured when this one is published. Home will be coming very soon.

Something most people will never think is awesome. Working out of town. I once thought it would be the worst and had joked about them finding my body in one of those camp rooms swaying back and forth tied to the roof, yet at the time I was more than intrigued. Watching youtube videos at lunch on camp life had me doing some very serious thinking. When I finally did go up before it was one of the best working experiences I have ever had. Being away isn't all that bad as all you do is work and sleep. When you are home you get a week or two (in this case, two) off which is pretty badass.

This I'm sure is being met with many rolled eyes whilst reading.

To each their own.

Yes another Alley Kat beer. I thought this was the last one but there is still one more in the holding pen back behind the computer. I think once that one is done we will give Alley Kat a break. Unless of course they announce some sort of new seasonal brew. Well then... Just one more.

Their grapefruit ale is one of the Summer seasonal ales. They did things right by giving it grapefruit, a true taste of summer. Why does it seen that all the craft beer companies know what they are doing whilst the big players have no idea?

We poured this one and it showed a nice clean, crisp, golden looking beer. Dammit did it look refreshing! A one fingered head stood at top and dissipated slowly. A citrusy smell of grapefruit obviously hit our nose we we snuffled it in. the first sip gave the obvious grapefruit taste. Some would think this would be sour but it isn't. It is actually quite refreshing. Grain, yeast, and nice easy hops round out the palate as this one goes down.

Quite the delight this one is! 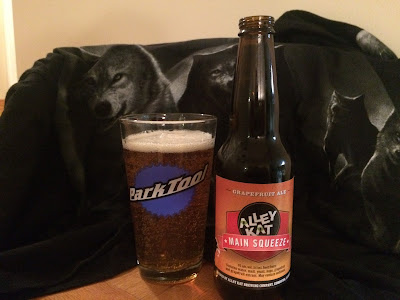