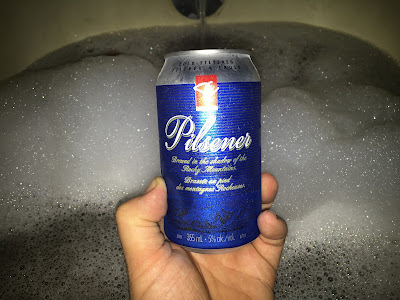 Happy Friday chumps. How was your week? Was it real good? I hope you got lots accomplished sitting behind your cubicles or who knows, maybe you put out some fires, handed out some traffic tickets. Did you make a sweet new double-entry bookkeeping system at your accounting firm? Did some pretty sweet conducting down at the railroad? Fack! I'm jealous of that one!

Huh? What is it? Maybe you had the week off cause you work in the oilfield. Oooooh. I can relate to that one my friend.

Whatever it is. It should be capped off with a beer. Whether it's after work shower beers or barbecue beers Friday beers are pretty great.

Today's beer comes from President's Choice. A giant Canadian grocery store chain which I do believe does not exist in America but I could be wrong. They are known for low prices and have liquor stores at select locations with Costco like pricing without the douchy Costco type crowds.

Brewed by Big Rock in Calgary, their Pilsner is a top notch buy if you want to get something cheap. It does come warm so be forewarned. They don't have coolers in the store so they can have lower costs. How sweet is that eh?

We poured and it gave us exactly what we expected. A golden beer that had a small one and a half fingered head that dissipated quickly but yet a small army of bubbles remained up top. The first sip was as expected as well.A rather underwhealming sense of not really wanting to try hard with what seemed like old applesauce mixed with water. Lot's and lots of water. Nuff said. 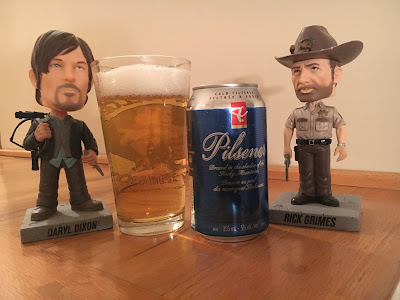