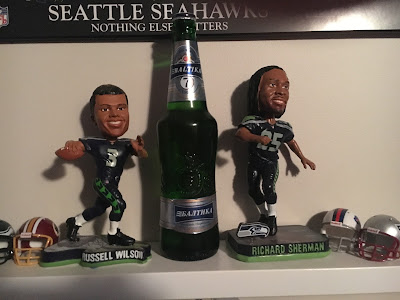 First off, lets apologize for that horrendous cover photo for this one. Some days I'm on it and some days it's quite obvious I'm not. Tonight when writing this its pretty obvious that my 'give a fucks' about photography are deep down in the shitter. I mean just look at the shadowing. The little helmets are offset and to top it off the photo is even crooked. I've even done a huge injustice to my two little hero bobbleheads that guard my beer review den at night.

"That's right little Russell, little Sherman. You are doing a fine job. I love you guys" I tell them every time I leave the room because it's not that I have a serious mental problem. I have passion kids. passion for bobbleheads.

I can give you some excuses as to why this happened but I have none. Pretty much all the beer review photos are done with an iPhone and the cameras on those are incredible.

This is the third beer review I have done in the span of three days... So is my sense of caring now out the window? Quite evidently yes. Will see how things go when we do the beer pour and break out the phone cameras.

This beer hails from Russia. That is what caught my eye immediately as I have not seen to many Commie.. whoops, I meant Russian beers around. Those were the 80's and we've grown since then. Baltika is the largest brewery in Russia and second largest in Europe. It launched in nineteen ninety so compared to some of those old breweries in central Europe it's cool factor is quite low. Although, it is Russian which helps bring that up quite a bit.

We poured and it showed a golden yellow beer that had a head of about one finger that didn't last. We did it again and fucked up the picture so in the end the lesson learned is... Don't do too many beer reviews in row.

A strong smell of wheatgrass and malty bread rose form the glass, all in all, quite skunky. The aroma was a bit off putting and we were scared to taste this one. We are soldiers though and charged on and were given a beer that had a skunk taste. Not a lot inside this one could save it. It almost tasted like it was burnt, very strange. A lot of people would have poured this out. I finished cause I'm awesome. 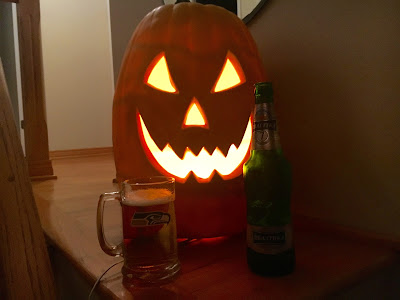