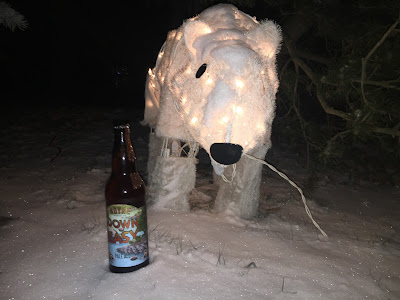 Merry post Christmas. Merry Boxing Day. Hold on a second... When is this posted? My second Friday up north? Am I staying longer? Not sure. If not this one is coming to an end soon. Written however on Boxing Day. Canada's original Black Friday until we started copying the Americans because we are insecure with our own identities. Well... Maybe it's just the greedy douchebag corporations trying to make more money.

So what have I been up to you ask? Oh you know... Opening presents, hanging with the family. Staying away from the frigid cold river valley.

The brewery featured is from Victoria, British Columbia. Formed in Nineteen Eighty Nine under the guide of one noble gentlemen whom we cannot name (partly because we couldn't find his name on the website but we sure as shit didn't look real hard.) This brewery is a lot like the other craft breweries as per their website that is. They have passion and a strong devotion to making an incredible beer. They call themselves 'beer geeks.'

Well beer geeks, let's see what you did with this one.

The cover features some folks enjoying a nice summer day floating on tubes down a river. Quite the difference between today's weather and what is conveyed on the cover. The theme of the beer is taking things easy which I have been doing the last week and the week to come. That's what Christmas holidays is all about right kids?

We poured in the lab and got a darkened golden beer that had a one and a quartered fingered head that transition nicely to thick lacing on top and running down the sides making me think very perverted thoughts of this one. Smells of grains and earthy hops with some citrus. We sipped and it showed off it's summer prowess. This would be a nice one to have while over the barbecue or sitting over a campfire. Caramel and  anode balance of hops round out an easy drinking ale that leaves the mouth satisfied. 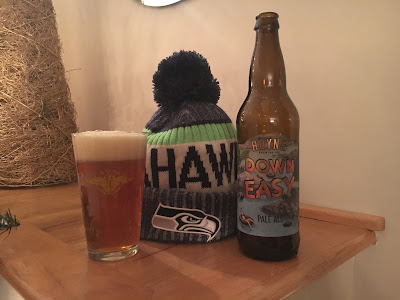