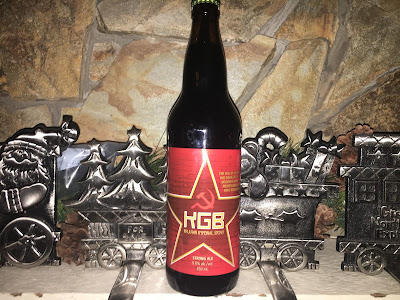 Perhaps the most badass label to have ever adorned a beer label in the whole history of beer Friday reviews on this here blog. KGB from Elbeck brews has the whole Beer Friday beer team screaming for this one to get going.

We got frustrated trying to find the location of this brewery as I had assumed it was somewhere in Portland or (sigh) British Columbia. 'Elbeck Brews Edmonton' kept coming up. I got frustrated and kept searching for a location. "Why the hell does it keep giving me an Edmonton location guys" I yelled. Slowly one of the interns leaned in and whispered into my ear. "Hey umm... They are from Edmonton" she whispered, quickly shooing herself away and back into the crowd afraid of the wrath coming her way for making me look stupid.

It didn't. I smiled and said "of course" and we continued. Cause it's the Christmas holidays.

So Elbeck is located right here in Edmonton. Kinda makes me proud and a bit embarrassed at the same time that I didn't know that.

The pour was one of the most amazing ones I have ever seen on a Beer Friday testing evening. A very dark and badass stout poured out with fury and ruthless abandonment. A one and a half fingered head stood for a short time which transitioned to lacing.  A smell of heavy green pine treed hops (is there such a thing?) with toffee.

It tastes of dark chocolate and old coffee, caramel toffee is noted in their as well. This is one hell of a beer to have on this night by your side which is incredibly cold on the time of writing. Something that you and your possible comrades can have while sitting around the campfire in the middle of the Winter night. The more this one is downed, the more I love it! 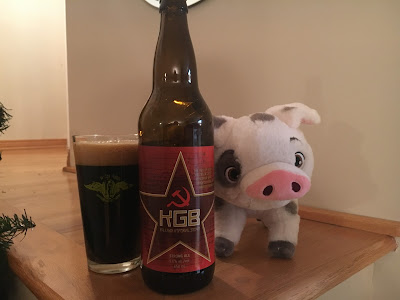